BridgeDuino facilitates rapid multi-node prototyping & testing of networks based on popular, cheap wireless modules and the Arduino platform. I did not wish to make a separate PCB for each of the various wireless components, so I figured why not one PCB to rule them all.

I also wanted a PCB that can act as a shield to Arduino Uno as well as work with the inexpensive and low-power Arduino ProMini.

As of this release, BridgeDuino supports the following wireless technologies/modules:

An unintended but welcome consequence of this combo controller is the ability to bridge between wireless protocols within limits imposed by interrupt conflicts, power consumption, interferences, etc. Some of these limitations might be overcome by modifying the libraries, others may require a change in the PCB layout. But the possibilities are endless. 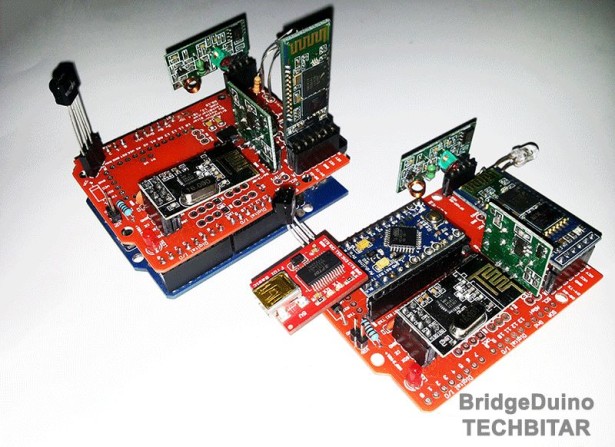 Please remember this is the 1st iteration of the PCB. I have done limited testing using two BridgeDuinos. The first was a shield paired with an Arduino Uno while the second with an Arduino Pro Mini 328/5V.  Each wireless component with no visible issues.  But as far as bridging from one wireless technology/module to another different one, I have done very little in this regard and the results were mixed for reasons I have outlined before. I also have not yet tested the BridgeDuino in low power configuration. In upcoming weeks, I will try some of the advanced configurations possible with the BridgeDuino.

For more detail: BridgeDuino: A wireless Arduino HUB and shield