This project can steer 10 different things wireless with the use of a normal TV-remote-control with the RC5 protocol, from manufacters like Philips, Grundig and Marantz.
If the Proton PIC Basic compiler is available, then you can ofcourse change the number of channels. 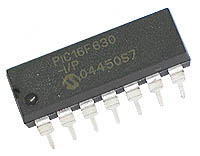 ‘System’ means equipment like TV, VCR, TAPE, SAT, etc.
‘Command’ means buttons on the remote like 0-9, I/II, PLAY, STOP, etc.
A push on a button from the RC5 remote-control sends: a header, a togglebit, an extended (7th) command bit, a 5 bit system-code and a 6 bit command code.
When the received system-code is equal to the programmed one in the EEPROM from the PIC, then the command-code is executed.
The programs are based on the 14-pins 16F630, but they can ofcourse make workable for almost every type PIC.
To see what system- and command-code’s your remote-control sends, you can build an other (easy) project: RC5/RC6 codes on a LC-Display
That project displays the IR-code’s on LCD so this project can be extend to steer much more channels wireless (till 127 outputs!) with for example the 74HC595.

This code is basically just from three sources, merged together with a few tiny tweaks by me. jsSHA, a JavaScript...