Windows 95 on an Apple Watch 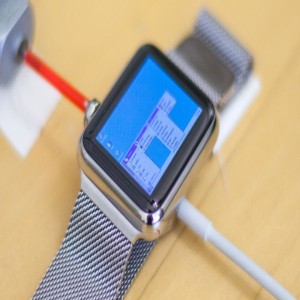 I installed Windows 95 on my Apple Watch

With a 520 MHz processor, 512 MB of RAM, and 8GB of internal storage, the Apple Watch packs a lot of computing horsepower into a very small package. On paper, its processor alone is about twenty-five times faster than the average 386, and 512 MB was the size of a hard drive in the mid nineties, not memory. As a result, I was feeling confident that the Apple Watch had the ability to run one of the most revered desktop operating systems Redmond has ever produced.Pretty much. I was born in the nineties, and the first personal computer my family bought (a $3000 screamer with a 300 MHz Pentium II, 256 MB of RAM, and the optional Boston Acoustics speaker system) ran Windows 95. Also, this isn’t the first time I’ve installed an old operating system on a watch. Here’s a video of my Apple Watch running Mac OS 7.5.5:

Unlike the above port of the Mini vMac emulator, the result here had to be interactive. That meant that Apple’s WatchKit SDK wasn’t good enough, since it doesn’t allow you to access user touch locations directly — it only lets you use Apple’s stock controls. Long story short, it’s possible to patch certain files within a WatchKit app to load your own application code rather than Apple’s. For more information, check out Steven Troughton-Smith’s excellent blog post on the subject.

Here’s an outline of the steps involved:

*Optional: hot glue a motor to the watch’s crown to keep it from falling asleep.

Yes! Due to the fact that it is emulated (not virtualized), it takes about an hour to boot.

For more detail: Windows 95 on an Apple Watch

Description The LT3799 is an isolated flyback controller with power factor correction specifically designed for driving LEDs. The controller operates...