Most of microcontrollers work within 5 volt environment and the I/O port can only handle current up to 20mA; therefore if we want to attach the microcontroller’s I/O port to different voltage level circuit or to drive devices with more than 20mA; we need to use the interface circuit. One of the popular method is to use the Bipolar Junction Transistor (BJT) or we just called it transistor in this tutorial. I have to make clear on this BJT type to differentiate among the other types of transistors family such as FET (Field Effect Transistor), MOSFET (Metal Oxide Semiconductor FET), VMOS (Vertical MOSFET) and UJT (Uni-Junction Transistor).

All the transistors have three state of operation:

One of the famous diagrams that show the transistor operating state is called the transistor static characteristic curve as shown on this following picture: 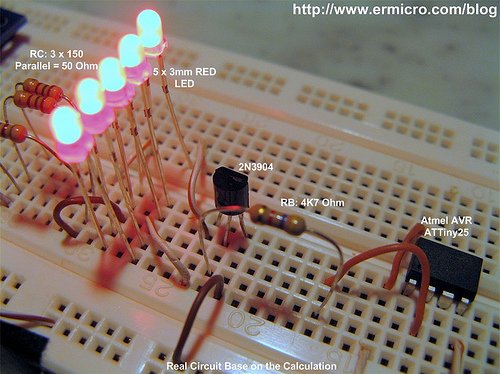 The above diagram show a typical microcontroller interface circuit using NPN transistor; the RB resistor is used to control the current on base terminal that make transistor OFF and ON (saturate); while the RC resistor is the current limiter for the load. if the load operate with the same voltage as the supplied power (Vcc) you can by pass the RC (not use).

Notice the diode (also known as the clamp diode) in the inductive load circuit is needed to protect the transistor again the EMF (Electromotive Force) voltage generated by the inductor component when the transistor is switched on and off rapidly, this voltage is oppose the source voltage. The diode will act as a short circuit to the high voltage generated by the inductor component, you can use any general purpose diode with capable on handling minimum 1 A of current such as 1N4001, 1N4002, etc.

Ok let’s calculate each of the RB and RC value on this following NPN transistor circuit:

On the circuit above we are going to use 2N3904 (the cheap general purpose transistor where you could easily found on your local market) to drive 5 LED from microcontroller port, from the 2N3904 datasheet we get this following information:

For most transistor in general we can use VBE = 0.7 Volt (should be saturate) and VCE = 0 Volt. Using the 5 volt power supply (VCC) and assuming VLED = 2 Volt, with each of them consuming 15 mA, we could calculate the RC value using the Ohm’s law as follow:

Power Dissipation on the RC resistor will be

Base on the above calculation we could use the nearest higher value available on the market; which is 47 Ohm, 0.5 watt resistor (for heat dissipation usually we use twice of the watt value calculated).

Assuming the hFE minimum is 100; the minimum current required in the transistor’s base terminal to drive the LED is:

This current can easily be supplied by most microcontroller I/O port; which is capable to drive up to 20 mA output current. Again by applying the Ohm’s law we could calculate the RB value as follow:

Power dissipation on the RC resistor will be

Base on the result you could use 4K7 Ohm, 0.25 Watt resistor (this is the common resistor which you could easily found on the local market i.e. 0.25 watt and 0.5 watt).

Use this RB calculation as your maximum reference value; in the real world most of the transistors hFE is vary and being measured (tested) with different VCE and IC value not to mention different specification even though you use the same transistor type. Therefore the real RB value could be lower than 4K7 if you really want to drive the transistor into its fully saturate mode where the VCE near 0.2 volt.

Now the question is how we determine the exact value? To answer to this question I build this following testing circuit base on the RC and RB calculated value above using the Atmel AVR ATTiny25 microcontroller to blink the five LED:

Bellow is the C Program that I used to test this circuit:

The program simply blink all the LED by toggling the AVR ATTiny25 microcontroller PB3 output port high for about 3 second and low for about 1 second and here is the test result when the PB3 port swing to the logical high:

As you’ve seen from the result there is about 0.4 volt drop on the collector to emitter (VCE) terminal instead of 0 Volt as we assume on the above calculation and the DC current gain is about 58 instead of 100 again as we assume on the above calculation. Now you understand there are tremendous different result between the 2N3904 transistor datasheet and my test circuit, this is because the 2N3904 datasheet is measured using the PWM (Pulse Width Modulation) with period for about 300 us (micro second) and duty cycle for about 2%, the reason to use this very short pulse period method in the measurement is because they don’t want to overheat the transistor junction; where this junction heating will vary the transistor hFE measurement significantly.

On my test circuit above; I used 3 second to make the 2N3904 transistor ON (saturate, VBE = 0.81 Volt, VCE = 0.4 Volt) and 1second to make it OFF. The other factor that make the test result differ is the various manufacture specification even though we used the same transistor type. Therefore the answer to the above question is; there is no exact value for RC and RB; is depend on your application but it save to use the above method to calculate the RC and RB and then do the circuit prototyping to test your design, next adjust your RC and RB value accordingly.

Some calculation suggestion is to use the collector to base current ratio of 10 (regardless of the transistor hFE value) to force the transistor into fully saturate (VCE = 0.2 Volt, as shown on the datasheet above) by using this following formula:

By using twice the calculated value you will get 933.32 Ohm, or you could use the 1K Ohm standard resistor.

In typical rapid switching transistor application actually we don’t drive the transistor into its full saturate state (i.e. VCE = 0.2 Volt),  because when the transistor is fully saturate, it tend to have a longer switching time (i.e. from ON to OFF to ON again). The VCE = 0.4 volt as shown on the real test circuit above is already adequate for most switching application, while we could still take advantage of the low transistor base current (i.e. IB = 0.88 mA). You could see this test circuit on the video at the end of this article.

B. Driving the Relay

Relay perhaps is one of the oldest electronic components that could be tracked back from the early years when we first use the electricity in our life. A relay basically is an electrical switch that uses the electromagnetic solenoid to control a switch contact. Because it use the solenoid (inductive load), therefore we need to use a diode to protect the transistor against the EMF. The main advantage of using a relay is that we could “relaying” or pass on the switch effect from a low power side on its solenoid to the high power side on its metal contact by using the electromagnetic effect, where both of the solenoid and contact has its own separate electrical specification.

Now using the same principal we could easily calculate the RC and RB value on this following circuit:

By using 5 Volt power supply and relay with 5 Volt and 60mA operating current: 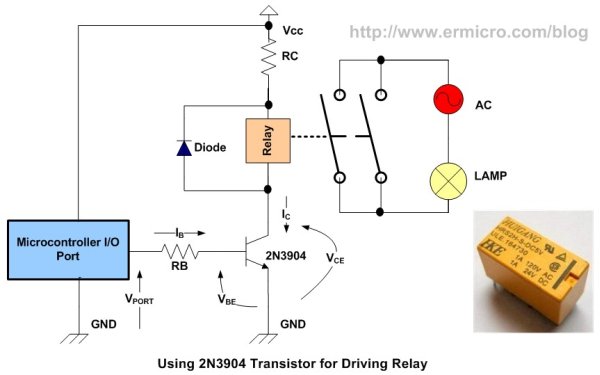 What if the load current is more than 1 A, let’s say you want to drive a DC motor? Perhaps you will think to use bigger transistor such as 2N3055 power transistor; unfortunately the big power transistor tends to have small hFE mostly less then 20, so it’s mean we have to supply bigger base current. We know that most microcontrollers I/O port can only supply a current up to 20mA, therefore by using this type of transistor the maximum current that we could achieve in the collector terminal is about 400mA; which is far bellow our expectation. The solution for this situation is to use what known as Darlington pair circuit:

Using the same principal we’ve learned before, we could easily calculate the RB value of the DC motor circuit interface bellow:

By using 5 Volt power supply and DC Motor with 12 Volt and 1 A maximum operating current:

For more detail: Using Transistor as a Switch