Imagine veterans and potential radio licensees gathered in a classroom, seated side-by-side facing the front, headphones on and a key at hand – both plugged into their QSO Party Rigs they each built the previous week – exchanging code as directed by designated net control! They’re not just sending in a vacuum or listening to a code practice oscillator; they’re communicating! Eric, 13 and a cell texting master, thinks to himself: “Gosh, this is faster than texting and I get an immediate response! When I get a direct conversion QRP RF rig I can transmit out of state! And mom isn’t hassling Bob and I when we practice at home cause she can’t hear ultrasound! And Bob and I can hear bats with the rig too. Way cool!” 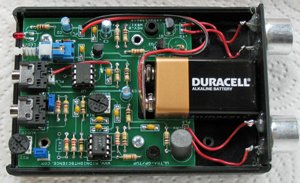 Imagine in the previous weeks, they learned about the code and the protocol of QSO exchanges, studied block diagrams of simple receivers and transmitters, learned Ohm’s Law, were told how and practiced identifying passive and basic active electronic components, learned to solder and follow kit instructions, found out how to “read” a schematic, and were introduced to a bit about radio regulation. They built the simple ultrasonic receiver-transmitter, the QSO Party Rig. They discovered the rig demonstrates a number of the concepts they discussed in radios class: selectivity, amplification, frequency conversion to the human range of hearing, automatic gain control, key control for receive/transmit, side tone to assist in sending better code, and the use of NPN and PNP transistors in a “final.”

Ok! Perhaps I’ve gotten a little carried away, taking to heart Steve Ford’s comment about my Ultra-RX1 Ultrasonic Receiver in his Short Takes column, July 2009 QST. “It’s somewhat uncommon to find a product that is both educational and practical. With the RX1…you enjoy both attributes, plus the extra dimension…” of ultrasound. But wouldn’t it be great, hearing Eric and his friends sending and copying Morse – at first via ultrasound and then on the air with RF? I designed the Ultra-QSO Party Rig with the above classroom “picture” in mind. The primary purpose of the Ultra-QP is to assist you and others in improving your Morse code and CW message exchange techniques. You can use the QP by itself with an earpiece or headphones as a code practice oscillator, without disturbing non-participants. They can’t hear the 40 kHz ultrasound transmitted; but you’ll hear the transmit side tone. Better yet, practice sending and receiving CW with a second or several Ultra-QPs in simulated on the air (pressure) exchanges. Call CQ, exchange messages, send bulletins, or send code practice in a group. No license is required.

A brief description of this rig follows: its architecture, schematic, PIC micro-controller and firmware. While the RX1 is a direction conversion, wide-audio receiver, this rig utilizes frequency division for reception and a push-pull transmit final.

The traditional receiver architecture for QRP rigs is direction conversion, as shown below. Usually an RF pre-amplifier is added, as noted. The carrier signal is “beat” by a local oscillator (LO), offset in frequency by the audio frequency desired, using a mixer circuit. Since mixers create an abundance of signals – both desired and undesired – a filter is added to remove the RF tidbits. Given that the level of the desired input signal is low – on the order of tens of micro-volts at best – an audio amplifier is added, often the ubiquitous LM386 IC.

This signal processing scheme works well for ultrasound and sonar systems too. The Ultra-RX1 receiver converts 35 – 45 kHz pressure waves to the range of human hearing. As such the LO tunes the same range as the pressure waves but is offset by 700 Hz. The only difference between it and the RF receiver is the use of a piezo transducer (PZT) in place of an antenna.

An alternative and inexpensive architecture for ultrasound receivers is frequency division reception (FDR), as noted in Figure 2. Since the sound pressure levels (SPL) of desired ultrasound signals tend to be very low, a two stage pre-amplifier following the transducer is the norm. The signal is then converted to digital and divided by a counter, rather than mixing. The audio is recovered by attaching the phones – via a potentiometer – to one of the taps of the counter. For example, a 40 kHz signal divided by 64 emerges as a 625 Hz tone. While not desirable as an RF receiver architecture, the FDR will work. You could build a 40-meter version to monitor the transmissions of the OM next door. Great DX!

When the LO of an RF QRP direction conversion receiver is buffered and used as the source for transmission, the plain vanilla QRP transceiver architecture emerges. To hear another station calling that zero-beats this rig, the LO must be pulled for either reception or transmission. In addition, to assist the operator in sending good code, muting the receiver and including a side tone for the phones increases code proficiency. 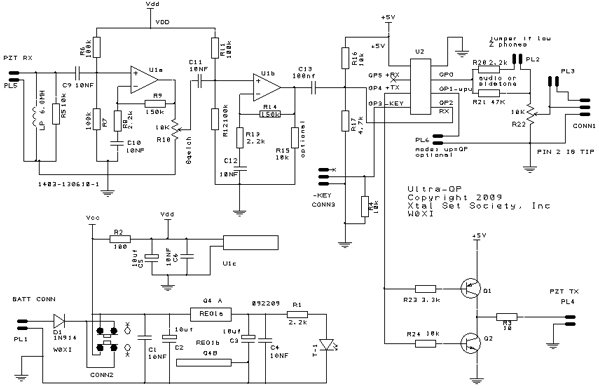 For an ultrasound transceiver, the same architecture can be used, as noted in the schematic for the Ultra-QSO Party Rig, displayed below. Let’s relate the receiver stages with the block diagram. Starting at top-left, the leads of an ultrasound transducer (PZT) feed U1, a dual-operational amplifier. Total gain at 40 kHz is set at or above 20,000! A pot is introduced between the stages to provide for “squelch.” To save chip count and increase circuit flexibility, the usual comparator and counter functions are implemented with a 12F629 PIC micro-controller and its stored program (firmware). The resulting audio output is a constant TTL square wave when a carrier of sufficient strength enters the PIC’s Timer0 Schmitt input. Audio listening level is set by POT R22 and hi-Z phones/crystal earpiece is accommodated with/without a shunt at header PL2. To enable the use of a pair of low-Z stereo phones, such as Sony’s 24-ohm MDR-V150, a jumper is placed on the two-position header PL3.

I am a big fan of LEDs.  Bright, colorful, flashing LEDs.  So, given my affinity for LEDs, I decided to...