The purpose of this lab is to build a machine that alleviates the process of distributing cards in gameplay with a given set of players in random order. Our team has successfully built a prototype of such a device that takes in a deck of cards and randomly distributes them among players and deposits a pile in the end that will be used throughout the play. In our project proposal, we had proposed a multi-shuffle machine to increase the randomness and improve the shuffle for a deck of cards. However, due to mechanical difficulties as explained in the mechanical section, we decided to remove that aspect of the project and instead focus on a random deal to account for removing this feature. To utilize this shuffler, we integrated the TFT display to display the questions and the status of the shuffler. 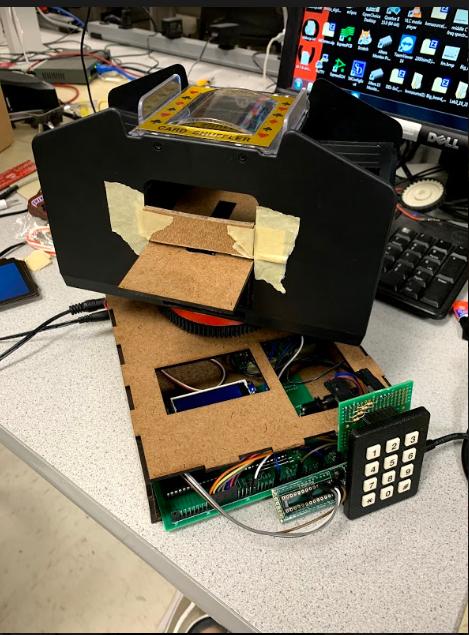 In addition, we integrated a keypad in which the user can enter the number of players and the number of cards they would like to deal to each player. Then, the machine will shuffle the deck of cards and deal cards to each player, one card at a time. Our machine works well and keeps track of the number of cards each player has been dealt and then once all cards have been dealt, the machine deals the rest of the cards to a “pile” between player 1 and player 2. As this is a one deck shuffler, we installed limitations in our code to handle only 52 cards where it was for shuffling or dealing.

We came up with this project because while brainstorming, we understood that most of our interests surrounded a project that was heavily mechanical. In addition, while playing a game with a group of our friends, we found that many people do not shuffle their cards properly and spend too much time shuffling and dealing cards. In addition, as other people started to bring up more ideas, we came up with the card shuffler/dealer idea to minimize the stress of shuffling and dealing and improve the chances of playing your cards right! We also understood our limitations and that we had some background with the hardware aspect since we had dealt with controlling motors in Lab 3. The design of this machine will be broken into two sections: shuffling and dealing. The deck of cards will be split into the two slots of the shuffler and the deck will fall and merge into the middle section. The first dealing motor will nudge out the card from the deck and then the second dc motor will push out the card to the pile. 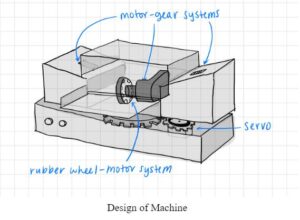 Some of the hardware/software tradeoffs included the number of pins we were provided in the Big Board. As we were limited by the type of pins we could use to develop the circuit, there were some restrictions while building the hardware and developing our code. In addition, due to hardware limitations such as the max speed the servo could rotate or the max distance the DC motor can push a card out, we had to adjust our project accordingly. For instance, in the beginning, we had not accounted for Ball Bearings while building this design and then found that the servo we had bought was much slower than we had envisioned and that we required ball bearing to rotate the entire system at a reasonable speed. Thus, we adjusted our project and reformed our expectations and design based on the hardware and software limitations we faced.

In relation to other automatic card shufflers and dealers, we believe that our card shuffler and dealer is competitive but will need to improve in speed and accuracy to be competitive enough for the market. For instance, the Card Casino Shuffler referenced in the Appendix is a very slow shuffler. So, compared to such shuffler, we believe that our device performs at a faster rate. That shuffler may be more accurate but to account for this loss in accuracy, we implemented the random deal. On the other hand, the automatic cards dealing machine referenced in the Appendix deals much faster and with better accuracy than our system. Therefore, in the future, we would need to improve the speed and accuracy of the system to be competitive with our market.

Finish PWM control to be able to control our own shuffling Finish rough draft CAD model of entire system to prepare for printing. Decide how much of bought system we will continue to use and how much we will scrap Experiment how to set up dealing system, how to deal one card at a time reliably Finish designing deck separation system Work with a stepper motor, see if we can move big system to separate dealing

We are a little behind schedule due to us all being busy, but we have made good progress and expect to be on track/ahead by the end of next week.

On top of what we had achieved last week: Soldered find PWM control circuit onto solder board Tested PWM control and finalized code and hardware for controlling motor speed Ran Code on how to run a servo motor which we plan to use for turning the system back and forth during dealing Experimented dealing system with servo motors and stepper motors and found that servos work better Printed the deck separation system and will test it tomorrow during lab

We are getting back on track but are still facing several issues with the mechanical assembly. In terms of the electrical or code aspect, we believe to be on track. We hope to finalize our plan and resolve our mechanical issues by the end of next week.

On top of what we had achieved last week: Soldered two more PWM control circuits onto solder boards Tested PWM control and finalized code and hardware for controlling three separate motors Wrote code to control the software states of the system Experimented dealing system with servo motors and stepper motors and found that servos work better 3D printed our rotating base Tested ball bearings but decided to not use them because they made the system worse Laser-cut the extended base of the mechanical assembly Soldered the Keypad system to control the number of players and number of cards per player before the shuffler begins

We are still facing a few issues with the mechanical assembly, but more of it is coming together now. In terms of the electrical or software aspect, we believe to be on track. Due to mechanical issues, we might have to drop the multi-shuffle addition to our project. We hope to have a fully functioning prototype by the end of this week.