For one reason or another I really like to use breadboards for building prototype designs. The breadboard offers superior flexibility in that you can change a single electrical connection at any time, as long as you have a long enough wire. One of the draw backs of the breadboard is that you tend to build the same circuits over and over again.
Since I like to use the PIC microcontroller in my projects I figured it would be nice to make a mini development board that could fit onto a breadboard and already had a power circuit and programming circuit connected. This way I won’t have to rebuild the same power + programming circuit every time I start a new project. This article describes my design process so that you can build one too! 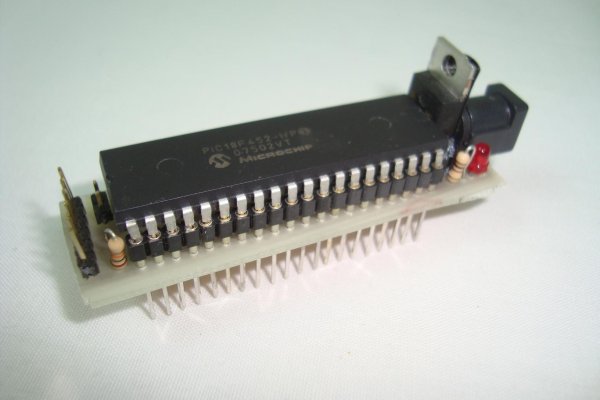 Purpose & Overview of this project
The goal of this project is to build a development board for any of the PIC 18F 40 pin series so that it can be powered up, programmed and used while also connected to a bread board. Since I plan to use the development board connected to a breadboard the PCB layout needs to be as compact as possible.
I will design this board around the PIC 18F452 microcontroller, the LM7805 +5v regulator to provide power and a standard 6 pin header to connect any ICSP connector to the board and program the PIC. A standard power jack should be used so a normal “wall-wart” transformer can be used to power this dev board.

PIC 18F452
The microcontroller that this PC board is designed for is the PIC 18F452, but realistically an 18F, 40 pin PIC can be used since the family shares a common power, ground and programming pinout.

PICKit Programmer
The 6 pin programming header will conform to the ICSP header standard so that we can use a PICKit2 or PICKit3 to program the PIC.

Vertical Header Pins
The vertical header pins will be used to build the ICSP connection for programming the PIC. Also, a small 2 pin jumper will be available to connected the PGM pin, for low-voltage programming, even though I doubt I’ll ever use that option.

Ferric Chloride
This is the etchant used to eat away the copper from the PC Board that we don’t want, leaving behind only our layout design to solder all the parts to.

Copper Clad PC Board
This is the type of PCB that we will use to build our circuit. Copper Clad is the most common and also the cheapest option for building an electric PC Board.

9v Power Jack Connector
Since I like using rechargeable batteries with my project, I’ll use a +9v to Power Jack connector to provide power. You could alternatively use a “wall-wart” transformer and the system will work the same.

Schematic Overview
The schematic for this project is kept to be as simple as possible. There are definitely ways you could add more parts to build a more redunant power and programming port, but that would increase the size of the PCB, we’re going for compact, yet functional here. The main parts in the schematic are the PIC 18F452, LM7805 and Power LED. 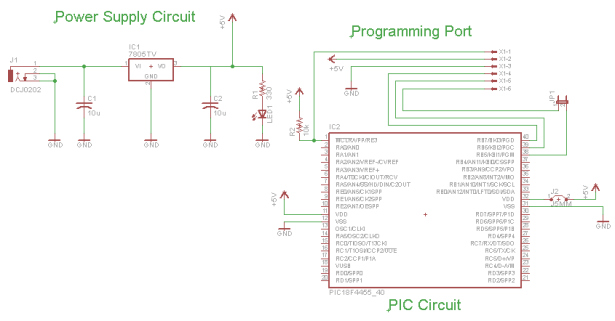 Power Regulator
The 7805 converts the input +9v down to a +5v output which powers the PIC. The PIC has two spots where it connects to power and ground, and there is a single 10kΩ resistor connected to the MCLR Pin1 of the pic that goes to power.

ICSP connection
ICSP is short for in-circuit serial programmer and this is the port used on almost every PIC microcontroller to load your program onto it. The PICKit3/PICKit2 have the same pinout as the connector seen above, the little dot on the PICKit3/PICKit2 tells you which connection is PIN1 or MCLR.

The Wino board is an Arduino-like stackable development system which is both smaller and cheaper than Arduino units and features...