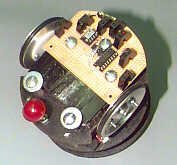 for full rotation and have had their controller boards removed to

convert them from servos to gear motors.

low cost, ready availability, standardized sizes and the fact that it

only requires 1 bit on your processor to control the motor.

very minimal with a finer control needed for this application. The

servo controller boards were then removed and the wires soldered

to the motor terminals and case ground. The motors were then

with only 2 processor bits per motor. This is implemented as one bit for

direction and another bit for power/speed control per motor.

detect if a line was present or not. The sensors chosen are the

QRB1114 from QT Optoelectronics and have a focal point of

about 1/4 inch. They are available from DIGI-KEY.

detection. This works but does not give the ability to follow

output fed to a processor bit. The transmitter LEDs are connected

to a 74HCT138 with a current limiting resistor to VCC. This allows

the entire array to use 4 bits for the sensors.

The PIC16F84 was chosen for it’s small size, easy reprogramability

and interrupts ( the fact that we manufacture a PIC processor

emulator also helped in this decision). It is clocked at 4 MHZ by

a ceramic resonator and is powered by 4 AA rechargeable batteries.

These same batteries power the motors. This is usually not recommended

since surges in motor current can affect the processors operation, but with

software no problems were experienced. The watchdog could reset the

processor if it went stupid before you could ever see it act up. 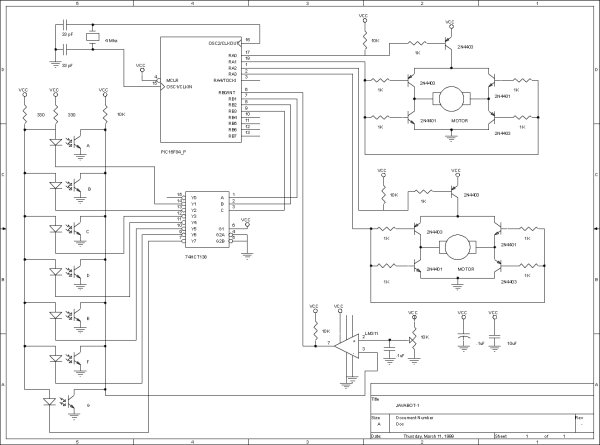 The servos were modified for full rotation by disassembling the servo

to gain access to the gear compartment. The main gear is then removed

and the stop that keeps it from rotating removed with an hobby knife.

removed to allow full rotation without moving the feedback pot. The

servo controller was removed and the feed back pot removed as well.

motor terminals. The servos were reassembled and taped together.

The objective of this project is to illustrate a technique of implementing adaptive brightness control to seven segment LED displays....