INSPECTAR USES AUGMENTED REALITY TO HELP YOU INSPECT YOUR PCBS 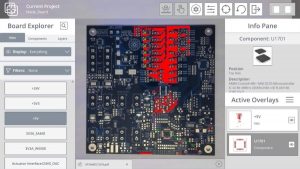 While making PCBs is now more affordable and easier than ever with several free open source tools for the design and several online manufacturers with fast turn around and doorstep delivery, one of its main challenges still remains board validations, and testing. As simple as this task may seem, it becomes quite laborious for complex PCBs. To solve this problem, a new software called Inspectar is adopting augmented reality to provide board designers with an easy way to view and interact with their board for validation and tests in a quick, easy and efficient way.

Inspectar which is currently in private beta, uses augmented reality to lay a similitude of your board’s design over a real-time image of the actual physical board. The overlayed similitude is obtained from your PCB’s original Gerber files, so you can toggle which layers are visible at any given time with an additional exploded view feature that allows you view multiple/all layers at once. As you move the board, the overlayed similitude layer automatically moves and changes orientation and view in line with the physical PCB, giving you the ability to inspect the design at any angle.

For example, by simply turning on a trace layer, users can see if a pin is properly connected to a component or if you made a mistake during the design phase — or the manufacturer made a mistake during fabrication. When used to full potentials, inspectar is able to show you as much as the function of a pin without you pulling a datasheet.

Asides being able to inspect boards designed by you, Inspectar is also very useful for working with open source boards designed by others and also good for viewing boards in a collaborative scenarios. Inspectar also currently supports Gerber files with extended comments generated from KiCAD or IPC2581B files exported from EDA tools like; Altium Designer, Zuken’s CADSTAR, Mentor PADS, OrCAD, Allegro PCB designer, and Pulsonix. The software also supports Eagle but the project will need to be imported into KiCAD first and export the gerbers from there.