This document describes the complete design for a camera switch that uses a servo to activate the shutter. This page include links to the complete circuit diagram, the .HEX file required to program the 12F675, and complete construction details.

The switch consists of a PIC and a small number of standard components. The Servo Camera Switch connects inline between the receiver and the servo and manages the operation of the servo.

BackgroundThere are a number of options for trigger a camera for AP work: For users of electronic switch circuits there are a number of designs available that each incorporate various features to manage various cameras. One of the key features in some switches is the ability to take a photo every now and again automatically so as to keep the camera from turning itself off.

This servo camera switch is aimed at providing features similar to some of the electronic switches for situations where a servo is used to trigger the shutter.

The switch will start automatically taking pictures again if a manual picture request occurs after LOS.Automatic picture taking stops on commandWith some cameras it is desirable to permit the camera to automatically power off prior to landing. When the camera powers off the camera retracts its lens and close the lens cover.

The switch permits the automatic picture taking to be stopped by holding the input servo command in a particular position for a set time. Automatic ‘keep-alive’ will reactivate if a manual picture request is received.

For example, if the camera automatically powers off after 60 seconds without a picture being taken then 1 minute before you plan to land this facility is used to stop the automatic picture taking facility. Then the camera will power off automatically and retract the lens.

For users who are controlling the camera with a gear channel the power off position can be the same as the camera shutter position. In this situation a short press of the shutter will take a picture, a long press will take a picture and then command the switch to turn off the keep-alive function. The camera will then power down after its normal timeout.

Note: When shooting in video mode with the power off position the same as the shutter position you should command the power off at the end of a video sequence, otherwise the power off will start a new video segment and the camera won’t power off until its memory is full.Still photo and Video modeThe servo switch will operate in either still photo or video mode. In video mode the servo switch monitors the ‘capturing’ status and correctly operates the keep-alive function only when the camera is not in capture mode.Cameras that require focusing timeThe servo switch can be configured to move the output servo to a ‘focus’ position for some time prior to the servo moving to the ‘shutter’ position. This permits the switch to be used with cameras that require a period of time for focusing prior to the picture being taken.User configurable parametersThe servo switch contains a number of parameters that are programmed by the user, in a similar manner to modern ESCs. The parameters that are programmed include:

The switch comes with an initial set of parameters configured into the switch. These initial parameters are documented in the programming information below and permit the switch to perform basic functions without significant programming.

Operational OverviewOn power up the servo switch recalls the saved configuration information. If there is an error detected in this saved information and programming mode is not selected the switch will halt and flash the details of which information is not correctly programmed.

The switch then waits for the input servo signal to return again to the no shutter side of the threshold input position.

When the ‘keep-alive’ time is reached without any picture being taken the switch automatically takes a picture using the normal picture taking sequence.

When the switch detects loss of signal on the input servo signal (a period of 20 receiver frames with no valid input – about 500ms) the switch will stop automatically triggering the camera. If a manual picture taking request is received the automatic ‘keep-alive’ will restart.

When the switch detects the input servo position is in the ‘disable keep-alive’ position for the appropriate time the switch will stop automaticly taking pictures and allow the camera to power off. This permits the user to power the camera off, and retract the camera lens, prior to landing. 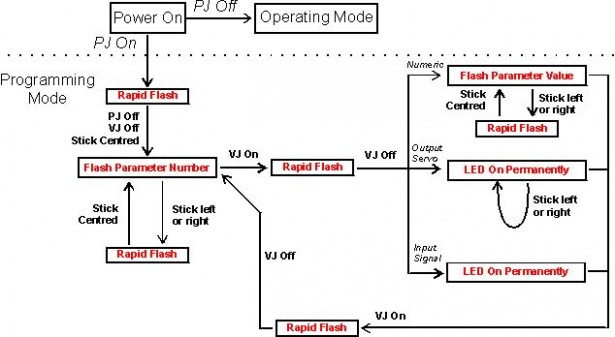 Note: to program the switch you will need to connect the switch to a receiver channel with a centre position and left/right or up/down. (Ie. aileron, rudder, etc.) While the switch can be controlled in normal operations using a switch channel (such as the gear channel) you will need to use a different channel for programming.

Note: Some users have reported a slight ‘chatter’ in the servo when in the programming mode. This is due to slight fluctuations in voltage as the LED switches on and off. This is normal and has no operational implication.

Programming the switch is performed by moving the control that is connected to the switch input, installing and removing the video mode jumper and watching the output LED.

The following diagram shows the various states involved in programming the switch. In this diagram PJ refers to the Programming Mode Jumper and VJ to the Video Mode jumper.

Alphanumeric LCD displays have become very popular for microcontroller applications because they can add a lot to a project in...