NetWorker – an advanced web server with a microcrontroller


An Internet connection would be a valuable addition to many projects, but often designers are put off by the complexities involved. The ‘NetWorker’, which consists of a small printed circuit board, a free software library and a ready-to-use microcontroller-based web server, solves these problems and allows beginners to add Internet connectivity to their projects. More experienced users will benefit from features such as SPI communications, power over Ethernet (PoE) and more.

There are three key elements in connecting a device to an Ethernet network: the Ethernet connection hardware itself, the software library (called the ‘stack’) responsible for handling the various protocol layers, and finally the top-level firmware functions. For example, to allow access to a device from anywhere in the world, it is possible to use a small web server running in a microcontroller.

Compact ready-made modules are available on the market to cover the first two of these elements. They allow you to connect a microcontroller to a network without having to get involved in the gritty details of its protocols. However, programming against the libraries provided can be a daunting task for the beginner; and more experienced users often find it necessary to ‘work around’ the firmware provided with the module to enhance or modify it.

Figure 1 (below) shows the circuit of the module. At the heart of the unit is a Microchip PIC18F67J60. This device is one member of a range of microcontrollers that include a 10BASE-T Ethernet transceiver. 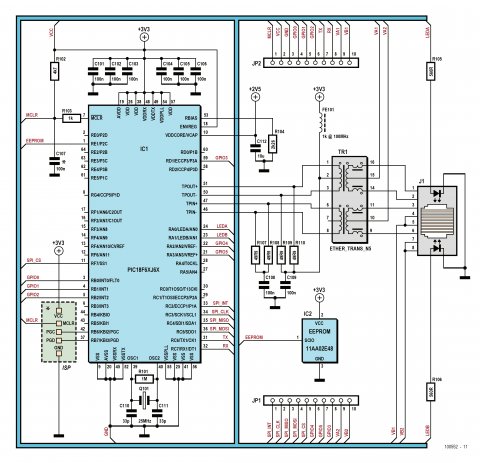 for more detail: NetWorker – an advanced web server with a microcrontroller

READ  PIC18 Development Board with Ethernet and USB
‹ Previous Next ›

This is the third in my series of minimalist watches based on the ATtiny85. This version displays the time by...