This post provides a simple digital clock implementation using PIC16F84A microcontroller and an LCD display. This code is written in C language using MPLAB with HI-TECH C compiler. You can download this code from the ‘Downloads‘ section at the bottom of this page. 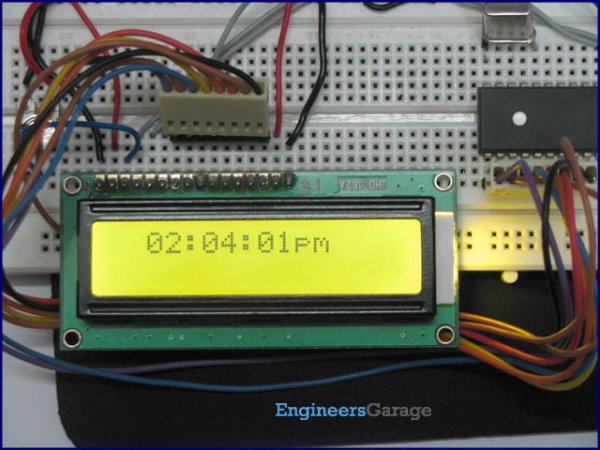 In this article, it is assumed that you know,

A crystal of 4MHz value is used in this circuit, which makes this PIC16F84A run at a speed of 1MIPS (Million of instructions per second).

In the main function, firstly LCD is initialized using InitLCD() function. Then Timer0 is initialized to generate 1msec interrupts. After that, in the while(1) loop, whenever msCounter reaches a value of zero[1], then new values of hrCounter, minCounter and secCounter are updated on the LCD. UpdateTimeCounters() function is called every time and it corrects the values of every counter variable depending upon the value of msCounter, which is incremented in the ISR function of timer0 (shown below).