What is Led matrix? Types of Dot matrix display with working 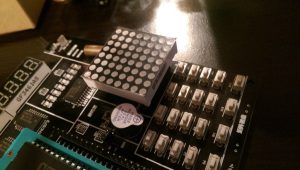 Interfacing on a 8×8 dot matrix can be fun and is easy to play with, so let’s get straight into it!

Step 1: What You Will Need:

A DEVELOPMENT BOARD OR

Step 2: Principles You Need to Know 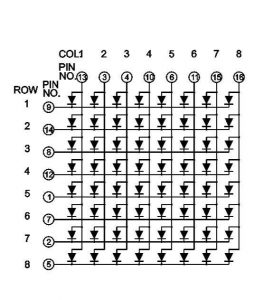 Before getting to interfacing anything you need to have some
background knowledge of how it all works. The dot matrix display has 64 LEDs and evenly grouped into 8 columns and 8 rows.

There are many programs online that could help you create the HEX value for the character, number or shape you want to display on the LED Display. Or you can calculate the HEX value by drawing small circles on a piece of paper in the form of an 8×8 dot matrix and then shade the ones you want to turn as shown in diagram 2.

Step 3: Time for Some Code

Since I am using a development board, I don’t need to make
any connections. If you don’t have a development board and can’t figure out how to make the connections, try find a Dot Matrix Module, to avoid the that problem. In this tutorial I provide code to display a countdown from 10 to 1 and a “I love u” characters on the display. You should be able to upload your hex code to your microcontroller. If everything goes well you should be able to get a countdown from 9 to 0 for the first code and “I love u” from the second.If your girl is the nerdy type, she will be flattered with the “I love u” display. If she isn’t she will still find it cute.

You can also create your own characters and play around with the display. Hope you enjoyed this tutorial and had fun!!!

Source: What is Led matrix? Types of Dot matrix display with working

Imec, the distinguished Belgian research center has invented a new and cost-effective method of cooling chips. This achievement can be an...