To simulate a circuit using microcontroller 8051 for verifying password.

The block diagram for microcontroller based password verifying system is shown. The purpose of the circuit is to verify the password entered by the user.

An 8-bit password is the input to this system (A simple example has purposely been dealt with here for the convenience of an average student. The student may modify the circuit and program to try 16 or higher bit password input as an intellectual exercise). In the first section of the circuit the password entered by the user (user-password) is compared with the actual password (password set in the microcontroller using the microprogram) by the microcontroller. The result of the comparison process is an 8-bit output at the output port, which is fed to a logic circuit. If the user-password is correct, the output of the logic circuit will be high. The high output of the logic circuit enables the AND gate in the next section, which has an asynchronous counter as its second input. The digital output of the AND gate is converted to the corresponding analog voltage using a 12-bit DAC. 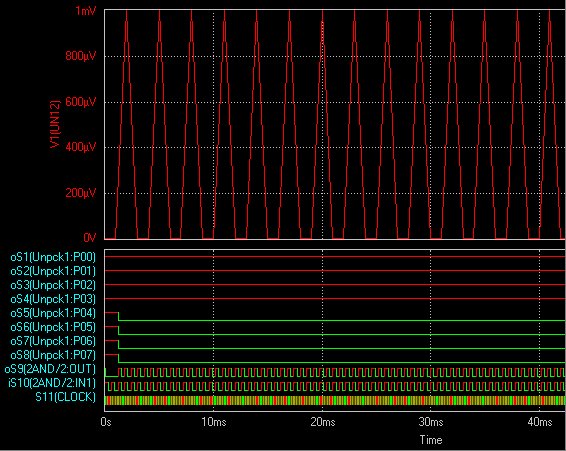 The high output of the logic circuit enables the AND gate in the next section. The asynchronous counter is realized using D-Flip-flops, inverters, four-input NAND gates and XOR gate as shown in the circuit diagram. The asynchronous counter output is passed to the Digital to Analog Converter (DAC) through the AND gate only when the password entered is correct. As the counter counts, an equivalent analog voltage is generated using the DAC. 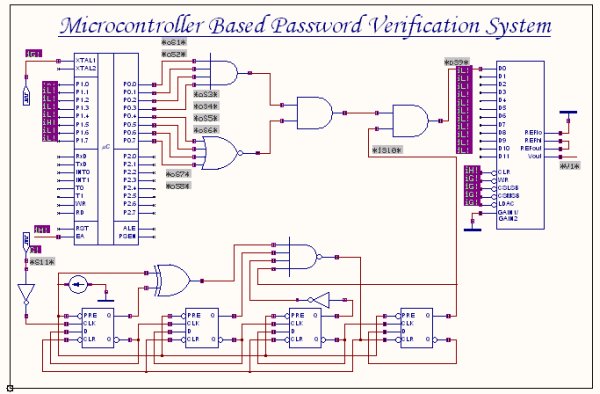 The Digital to Analog Converter used here is LTC1450CG. This device has 12 input data pins. This DAC has an output buffer amplifier, reference (voltage) and a double buffered parallel digital interface. The digital data is fed to twelve data lines. The analog output voltage is obtained from the Vout pin. Depending upon the logic state of the CLR, WR, CSLSB, CSMSB and the LDAC pins, the input data is loaded and latched into the 12 bit DAC latch present within the DAC. The output buffer is configured such that the gain is 2 by setting the Gain/Gain2 pin to ground. The analog voltage from the DAC (i.e. the output of the whole system) indicates the correct entry of password. Otherwise, the DAC output is null. Thus the microcontroller performs the password verification.

MikroElektronika, a Belgrade, Serbia-based company is well-known for producing quality software and hardware development tools for a wide range of...