An IR sensor is an electronic device, that produces in order to detect some parts of the environs. An infrared sensor can measure the heat of an object as well as detects the motion. These sensors are used to measure only IR radiation, rather than producing it that is called as a passive infrared sensor. Generally in the IR spectrum, all the surrounding objects generate different form of thermal radiation.These kinds of radiations are not observable to our eyes, that can be sensed by an IR sensor. The emitter of the sensor is infrared LED and the sensor is an IR photodiode which is sensitive to infrared light of the same wavelength as that produced by the infrared LED. 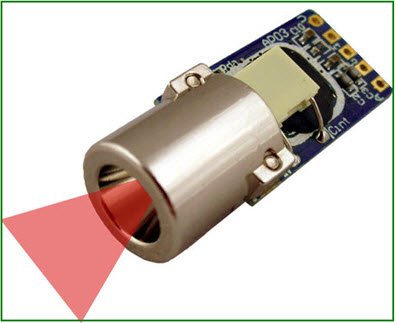 When infrared light drops on the photodiode, the resistances and o/p voltages change in proportion to the received magnitude of the infrared light.

What is Infrared Sensor?

IR sensor is an electronic device which is used to sense heat & objects. It works with the sensing of IR radiations and variation in heat in its nearby. IR sensors are classified into two types such as photo IR sensor and thermal IR sensor.

The IR sensor circuit diagram is shown below. In the circuit below, the main parts of this sensor are photo diode and the IR receiver LED. Photo diode emits IR radiations when it strikes to any object, then turn back with some angle. The IR receiver detects reflected radiations. Because in this circuit, we are using a photo diode, so this type of sensor is called a photo infrared sensor.

The Required Components of Photo Infrared Sensor include IR receiver TSFF5210, Photodiode, 100 ohm resistor, 10k resistor, 10k variable resistor and LM358 IC. IC Lm358 is used as a comparator when IR receiver senses IR radiations. When the o/p of lm358 goes high, then LED connected at the o/p turns ON. The output pin of the IC LM358 is used to interface with PIC microcontroller.

The o/p of the infrared sensor circuit is connected to RA0 pin of the pic microcontroller. It is arranged as i/p with TRISB registers and the o/p of this interfacing will be displayed on LED that is connected across PORTD includes RD5, D6, RD7. Here o/p pins are RB0 and RB1.

For more detail: IR-Sensor Circuit and Interfacing with PIC Microcontroller

The MAX6369-74 series watchdog-only supervisors are available in tiny SOT23-8 packages and have selectable watchdog timeout periods (1.7ms to 104s),...