Tired of spending hours and hours in wire soldering? Do your circuits look ugly and you are looking for a way to produce professional-like PCBs? Then you had better try photoetching. And the first step to do that is to have the right equipment that is an Automated Exposure Box. Moreover if you like tinkering with microcontrollers, here is the challenge and it’s high time you launched the design of your own PCB Exposure Box.

In the following lines I describe the procedure I followed to build the Box, the Lamp System and the Countdown System which is based on the AVR mega8 microcontroller.

Four blacklight lamps, 15W each, emit radiation at the region of UVA, with a peak around 350nm where the thin surface above the copper of the photosensitive board, is… sensitive. The lamps are taken by two and are connected in series thus shaping two similar modules. Each module has its own ballast and can be connected to 220V AC via a relay.

A microcontroller counts a user defined countdown and upon reaching zero activates a relay. The time remaining is displayed on four 7-segment led displays. The maximum countdown is 99 minutes and 59 secs.

All things above are housed in a wooden box. You can design the box by yourself however I had it done by a technician.

There are 3 distinctive parts that constitute your PCB Exposure Box; the Box the Lamp System and the Counter System along with the display.

You are gonna need a wooden box with dimensions aproximately 50x30x60 cm3. The box must have an extra room for hosting the countdown board and the two ballasts. The height of that room, that is the distance between the bottom of the box and the shelf, can be 5-8 cm. On the one side of the shelf will be installed the four starter bases and on the other side the four lamps along with their G13 bases.

Here is a very detailed description on how to build your own box, upon which I relied to decide the dimensions of my box. However the final design I used is the same as Papanikolaou’s box in his Darkroom Timer project. Many thanks to both of them!

For the lamp system you will need:

The connections you have to make for the lamps are as in the next image.

This is a very popular connection for two low wattage fluorescent lamps connected in series.

There are two identical modules connected in parallel. In each module, initially, the AC current flows through the two starters and the ballast. After a while one of the starters goes open-circuited and the current in the circuit is halted. This brings the ballast inductor in an extremely uncomfortable situation and it reacts violently developing a great voltage across its terminals. The value of the voltage can be as large as some kV and that is exactly what the fluorescent lamps need in order to be turned on. After that transition effect the voltage accross each lamp gets stabillized around the 50~60V which is the lamps operation voltage shown in the manuals.

As for the construction details, I put the lamps and the starters on the two sides of the wooden shelf and the two ballasts on the bottom of the box.

So, as far as the shelf is concerned. First, I screwed the starters’ bases on the I made the following connections one side of the shelf

Second, on the other side of the shelf, I screwed the eight G13 lamp holders, having first, drilled the holes needed by the wires to join the lamp bases with the starter bases

also don’t forget to screw someshelve holders so that you can put and get out the shelf from the box, next do the wire connections 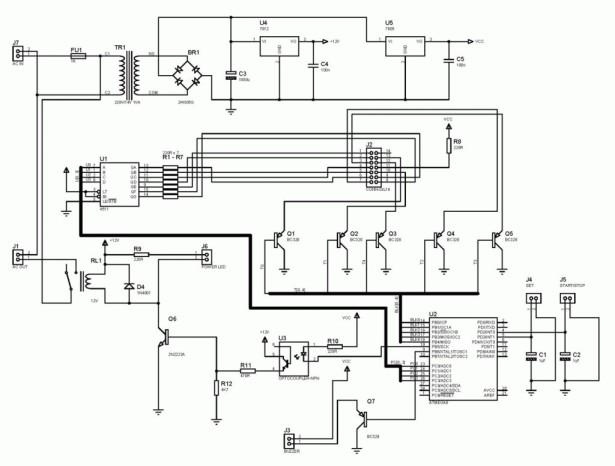 This is the most amusing part of the story. Here you have to deal with Software and Hardware.

As for the Software part I wrote the code in C using the winAVR and avr-gcc plugin along with avrStudio. Using ProteusVSM I tested the code in simulation environment which saved me a lot of effort and time. Then I downloaded the hex code to the chip with the STK500. I strongly recommend that you try and write the code by yourself so I don’t attach any code here except for the downloadable hex. If you need any help about the code, please mail me at aetheodhotmail.com

As for the Hardware there has been a lot talk about on how to do it. The Darkroom Timer of Vassilis Papanikolaou contains quite apprehensive schematics plus PCBs. My schematic contains all the variations required for the substitution of the PIC with the AVR mega8. In addition I use only two buttons and I put the regulators in parallel instead of in series.

For more detail:  Build your Own PCB Exposure Box with Fluorescent Lamps and Countdown System

Use a PIC Microcontroller to Control a Hobby Servo

This instructable describes how to integrate hobby servos (the kind used in RC planes, cars, etc.) into your microcontroller projects....