I’m a fan of all kind of weather stations. When Daniel Eichhorn twittered about his new version using an E-Paper display module, I immediately preordered one. I decided to build a station with a custom enclosure, so here is my version of a 3D printed version, featuring magnets so it can be attached to the fridge: 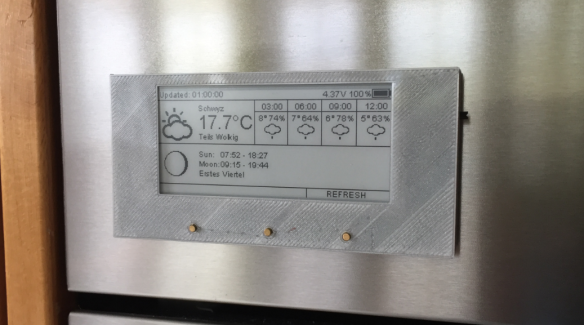 Using e-paper for a weather station is an ideal solution, as the data does not need to be updated often. By default, the station reaches out every 20 minutes for new data over WiFi and then updates the display. Daniel Eichhorn already has published kits for OLED (see “WiFi OLED Mini Weather Station with ESP8266“) and touch display (see “WiFi TFT Touch LCD Weather Station with ESP8266“). I like them both, but especially the TFT one is very power-hungry and not really designed to work from batteries. What I would like is a station which can run for weeks.

The e-paper weather station from Squix/Daniel Eichhorn is available in two versions:

Because the ‘lite’ kit was supposed to be available earlier, I ordered that version. And I wanted to build custom enclosure anyway.

Daniel provides an extensive and well documented software for the module on GitHub, the setup guide is available on https://blog.squix.org/espaper-setup-guide.

Because I was familiar with his other weather stations, I had the module up and running in less than 30 minutes.

Because the ‘lite’ kit does not include a programmer (actually a USB to Serial Converter), I had ordered a CP2102 module.