LTC7820 is, a high power fixed ratio charge pump DC/DC controller that eliminates the power inductor in a non-isolated intermediate bus converter, allowing up to a 50% reduction in circuit size and up to 4000 W/in³ power density. The 72V fixed-ratio DC/DC controller can deliver 500W. 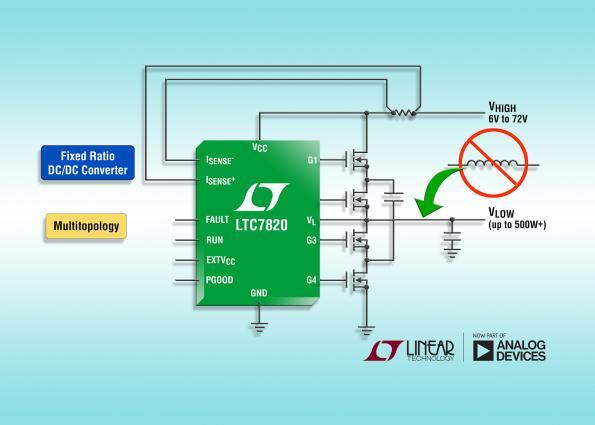 Non-isolated regulators and voltage level converters that employ energy storage in capacitors rather than inductors are well-known, but the majority of DC/DC designs in recent times have used magnetics. Indeed, a feature of various companies’ presentation of devices that use ever-higher switching speeds is the ability to reduce the size of the inductor. Now, Linear Technology (now part of Analog Devices) has eliminated the inductor and introduced the LTC7820, that employs energy storage on capacitors and that drives external MOSFETs in voltage divider, doubler or inverter configurations with an efficiency of up to 99%. As the energy storage is not in an inductance, there cannot be a transformer so the topologies available – which include the ‘Dickson converter’ – are necessarily non-isolated. The IC’s open loop fixed duty is suitable for non-isolated intermediate bus applications in power distribution, datacom, telecom, high-end computing and industrial systems.

The LTC7820 charge-pump controller operates over a 6V to 72V (80V abs max) input voltage range and can produce output currents in multiple-tens of Amps, depending on the topology and choice of external components (FETs/capacitors). It can be configured for a 2:1 step-down ratio from an input voltage up to 72V. Two of the LTC7820 ICs can be cascaded for a 4:1 step-down ratio. For even higher step-down ratios, such as a 6:1, the Dickson converter topology is recommended and is suitable for 54V input to a 9V outputs, requiring only a single LTC7820. The LTC7820 can also be configured for a 1:2 step-up ratio or a 1:1 inverter ratio from an input voltage as high as 36V.

The ODROID-N2 SBC is a new generation single board computer that is more powerful, more stable, and faster performing than...