BML GPIO-14 USB Board for PCs


Ever miss the simple days of using a PC’s LPT1 parallel port to bit-bang GPIO over 8 output pins and 4 input pins of the DB-25 connector? I sure do. My first design project as a BSEE graduate in 1993 was to design a LPT1 controlled test fixture for the Motorola MDT-9100-T data terminal (shown below). Those were the days. By multiplexing 12 parallel port pins into 74HC dip CMOS latches and transceivers my test jig tested all the IO signals of the MDT-9100s 386sx motherboard. All of the diagnostic software could be written in C on my Windows 3.1 desktop thanx to this versatile interface. Those were the glorious simple days of computing. Sigh…. Then USB came along and killed the wonderfully easy parallel port interface. 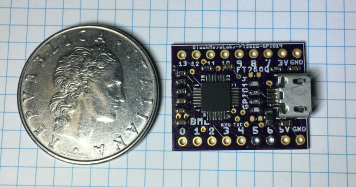 The FT260 is a USB device which supports I²C and UART communication
through the standard USB HID interface. This is very cool as it means it should work with any USB host platform without requiring any special device drivers. See the FTDI Application Note AN_394 User Guide for FT260 for details on programming the FT260Q, also the datasheet.

With hidapi installed, you should now be able to run this example script from BML that will configure all the FT260Q pins as GPIO outputs and toggle them as fast as possible.  Note the USB HIDAPI interface to HID-Class devices isn’t “bare metal” blazing fast. This sample Python toggles all the GPIO pins every 300-400uS, or about 1kHz. For Windows, the HID API interface requires all reports be 64 bytes in length, so the example Python here always pads reports with trailing 0x00’s to be exactly 64 bytes long. Untested, but padding the reports under Linux should not be required and may be considerably faster than Windows.

Hardkernel has produced a single-unit version of its four-unit, 32-core Odroid-MC1 cluster computer for running Docker Swarm, Build Farm, and other parallel computing applications. The...