This post describes the design and construction of a 3-phase loudspeaker intended for Leslie Speaker emulation. The unit is intended to be driven by a 3-channel audio amplifier The Brute, which in turn is controlled by LEMS, a micro-controller based control system, the construction of which both are described in companion posts. 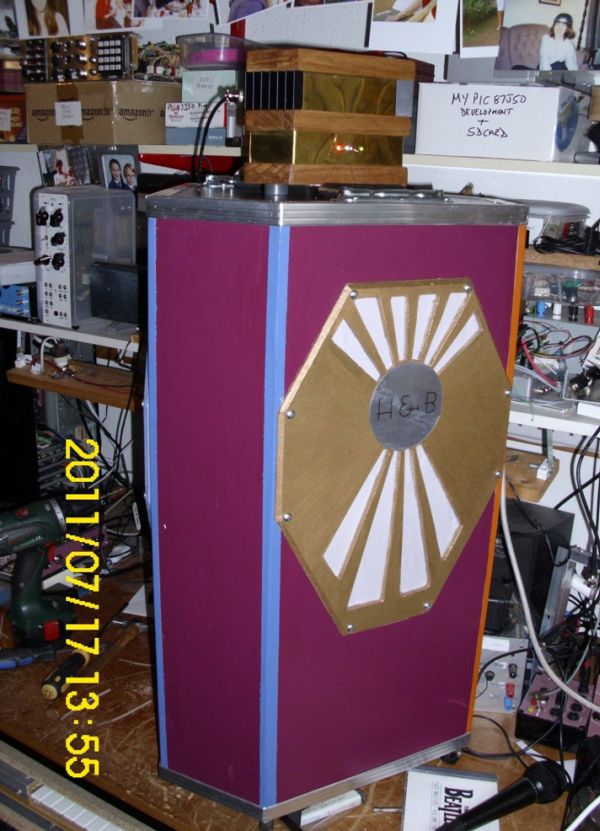 Companion posts are as follows:

Well, I once knew a girl with three heads.. No, you wouldn’t swallow that. But the name I’ve adopted is apparently quite common in the USA as a girl’s name. In fact it isn’t hard and you’ve probably already guessed that’s it’s a conflation of tres – meaning 3 (in spanish etc.) , and lie, the last part of Leslie. Whimsy? Probably, but I needed to call it something.

I’ve lifted a small part of text from the LEMS post which I hope clarifies what is being attempted, and this is given below:

I made the long sides ~12 inches (300mm), and the short sides ~6 inches (150mm). This gives an external angle of 120 degrees between the polar plane of each loudspeaker chassis. With an external height (on my cabinets) of around 27.5 inches (698mm), this gives a total volume of around 2.5 cu ft. Internal volume will be a little less than this, and of course each loudspeaker has only 1/3 of the volume, because of the 3 central partitions.

Each compartment should be made as airtight as possible – mainly due to the use of high-compliance (long-throw) loudspeaker units. These give good bass response in small cabinets, but require near-sealed enclosures, if damaging over-excursion of the loudspeaker cone is to be avoided. I found that screwed joints and the liberal use of a bathroom sealant that remains plastic when dry is the best solution. I advise against the use of glue. Access for maintenance would necessitate damaging a glued cabinet. With the sealant used, panels are easily disassembled, and the sealant can be simply replaced.

As this unit was intended to be experimental, and for use mainly at home with a small 70’s organ, and my guitars, I decided to cater for no more than about 30watts per channel, this keeps costs and size down, and allowed for the purchase of 3 reasonably-priced high-compliance units from my local stockist.
The loudspeakers are complimented with 3 cheap piezo horn units. Information on these suggested the use of series connected 47ohm resistors – I ignored this for the input powers I was using, and connected these up without the series resistor, to no ill effect.

Despite the loudspeaker units being cheap, it is worthwhile incorporating a suitable fuse in series. I used a 20mm, 1.6amp quick-blow item, that will protect the loudspeaker against gross DC flow. Too many loudspeaker designs omit this simple protection, with dire results in the case of accidents. The screw-in fuse-holders were sited on a small panel alongside the loudspeaker 4mm connector sockets.

Materials.
The sides were all made from reclaimed chipboard, mostly melamine-covered, of the type used for kitchen cabinet carcasses and cheap 70’s fitted wardrobes. The top and bottom were made from .. .. new chipboard, and the loudspeaker grilles from … new MDF.

The sound absorbent material filling each speaker compartment has one important criteria – it should contain bubbles. Bubbles are just great at absorbing (converting to heat) the sound energy that would otherwise bounce around the hard reflective inner surfaces of the cabinet. Don’t let merchants sell you grossly over-priced ‘wadding’. My experiments have shown good results with: a) The remains of old hollow-fill pillows or cushions; b) Bubble-wrap; and c) Expanded polystyrene. All of these can be hoarded until needed – the latter two are usually used as packing materials for stuff delivered to your door.

How to Program a PIC Microcontroller to Build a Project

The recent trends in the advanced technology are helpful in developing most advanced electronic gadgets. Most of  these electronic devices...