This is a simple PIC microcontroller

as sensors to follow the sun  maximizing solar panel illumination.

The entire prototype frame was built from simple, cheap and widely available strip board

. Just cut it to a required size, widen the holes with screwdriver to fit connecting bolts and you’re done. If you want to build a similar circuits or use current configurations as a basis for more advanced design follow the pictures, hopefully it will give you some ideas. Here are some of the development steps taken from a standard strip board

to a final design.

The assembly code is a modified version of original code from recently published Stepper Motor Interface PIC16F post. Now 2 step motors can independently rotate to any direction according to amount of light received by each IR LED

will move the platform with mounted solar panel in the direction of stronger light source. Motor control is done by outputting coil switching sequence through ULN2003A

.During the development a few limitations or “bugs” of current design were discovered. Although the payload platform can move in 2 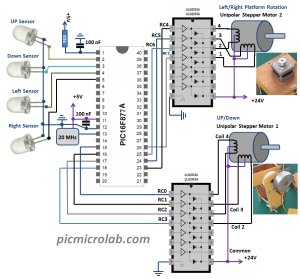 axis,(UP,Down,Left,Right) the solar cell attached to it is too heavy for stepping motor that was used to rotate it,if I had to build a new solar tracker  I would change the center of mass or use counterweights for better balancing thus reducing the motor load, also direct frame connection to a platform rotating motor without some sort of reducer mechanism was a mistake, again the final design with solar cell attached weights too much and the motor doesn’t have enough torque to rotate it properly even with max allowed 24 V.UP/Down axis movements are working OK.Assembly/hex files available here.

You can use this Universal Infrared Receiver (UIR) project to control your PC:  Starting Windows programs,  setting the Windows volume...