In this post we will study the ADC ( Analog-to-Digital ) Module of the Microcontroller PIC16F917 . We will study a real circuit of PIC16F917 interfacing to a semiconductor Gyroscope.
The Gyroscope is a motion sensor that senses tilt in a certain direction . The used sensor is a yaw rate sensor ( free sample from Analog Devices . The Gyroscope ADXRS613 was sent in an evaluation package EVAL-ADXRS613 ) . Yaw means rotation around the vertical access . And rate means the acceleration of this rotational motion. 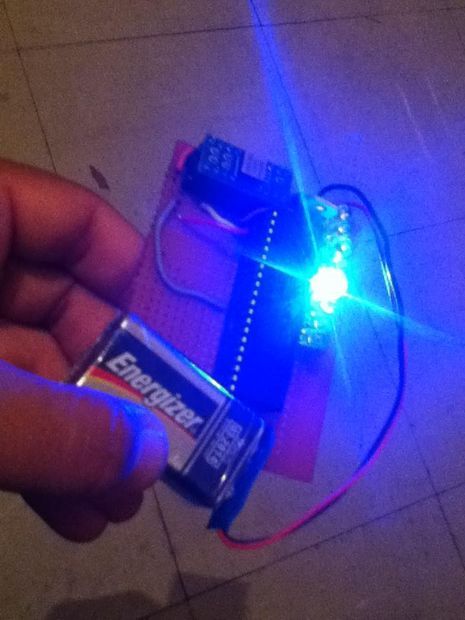 The output from this sensor is analog signal which represents the Yaw rate in certain direction ( Left or Right ).
The analog signals are converted in the ADC module of the PIC16F917 and are represented on an LED column according to the yaw rate and direction.
The program is very simple and straight forward. It starts by configuring the ports of the Microcontroller for input and output. Then the ADC Module is also configured ( Channel , sampling rate and result data format ).
Then the infinite loop of the program starts which contains the step of
starting the conversion ,
waiting for conversion to complete and
displaying the result on the LEDs.
When the circuit moves in clock wise direction , number of LEDs in one half of LEDs column illuminate according to the rate of change in angular motion.
And When the circuit moves in counter clock wise direction , the other half of the LEDs illuminate indicating change in direction and indicating rate of change in angular motion.
This is the circuit as shown on Proteus 7 simulation environment
The Gyroscope is replaced in simulation by a variable resistance because Proteus 7 does not contain a Gyroscope model.

I did the teardown of the CSI 75W solder station as well as the Hakko 936. The Hakko of course...