The Development Board v. 1.1 connected to an LCD display. It is well visible (read further, in the description) the row of LEDs used to check the logic state of up to 8 I/O ports or external circuits’ pins. Of course, if you own an 8 trace oscilloscope, you can do without it. :-)) On the right bottom the programming cable.

Characteristics of the DB12

As I have done with the PIC 16F84 / C84 Evaluation Board, designed and built by myself according to my need, when approaching a higher level microcontroller I decided to design a circuit allowing easy development of applications. This board, in fact, allows the PIC to be interfaced with external circuits in a reliable and versatile way, making it possible to blame just the external circuits in case of electrical problems, and, of course, to concentrate just on the software. 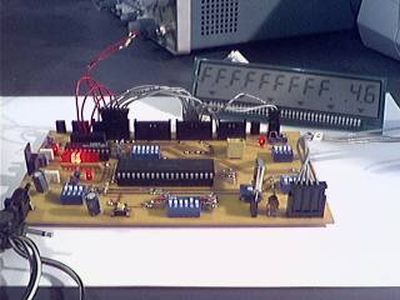 a) the OSC2 pin would be multiplexed with RA6
b) in the 16F877, LVP programming and LVP-mode working involve the RB3 pin, while in the 18F4x2 and 18F4x8 families the RB5 pin is involved, so, in these ones, the LVP mode is not selectable just through a dip-switch like you can do for the 16F877; LVP working (but not LVP programming) should be anyway possible connecting to the ground the proper pin, through a resistor, through the board’s connectors or through a wire
c) the values of capacitance adviced for the main crystal oscillator, in the range 1 MHz to 20 MHz, are the same in the datasheet of the 16F877 and of 18F4x2 and 18F4x8 families; the value of 15 pF choosen for this board (and tested with crystals from 4 MHz to 20 MHz with the 16F877) should therefore be suitable also for the two mentioned 18 families.

Let’s now describe the main characteristics of this circuit:

As previously said, this circuit is not a PIC programmer, but it can be easily interfaced with one of the many programmers you can find, allowing you not to remove the microcontroller from the board (in-system programming).
Compared to the version 1.1, connection also to LVP programmers is now supported; besides this characteristic, it is of course possible to work both with chips with the LVP bit set (just a switch need to be set) and with the LVP bit not set; it is of course possible to interface the board with traditional programmers (12 V on /MCLR), the most part, I would say.
The D.B. is built on a double side board, so realizing it is not the simplest thing in the world; besides, taking a look at the layout, you can easily recognize that it was the only way to make it, unless one had decided to insert dozens bridges.

NOTE: the images of the layout and the schematics further on this page are at low resolution, for obvious problems concerning the time needed to load this page, but their links point to better resolution images. When you click on a link of an image (i.e. the layout) and a new window opens, I suggest you not to close it, as it could be useful to take a look at it while reading this page and in particular for the examples that are further described.

While designing this circuit I tried to realize a versatile circuit and, in the same time, I also pursued the possibility to mount only the components one wish, making this D.B. a not expensive one.
It is of course possible to mount later a part or all the components not soldered at first.
The version here described is the 1.2, completed in February 2003.