Why have an enclosure?  The enclosure of a clock
doesn’t tell you the time!  So I built this PIC clock with no
part that doesn’t serve an electrical function.  The
hanger is the ground.

The microcontroller is the 40-pin PIC 16F877.  I set it up,
then let it run for a few weeks, saw how far off it got, then
went back into the code to add an extra delay to get the
timing just right. 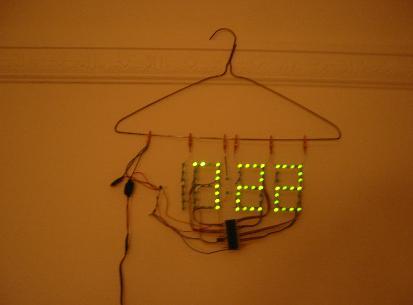 I originally planned to have this run off a 9 volt battery, but I
found that it would drain the battery in less than 24 hours,
not an ideal clock!  So now it runs off a wall adapter.

There’s a resistor between the LEDs and the ground that is
the hanger.  Since several segments share one resistor, the
brightness of one segment depends on how many of its
neighbors are on.  The seven digit has the biggest problem.
It would have been better to put the resistor between each
pin and LED segment instead.