Build a large dancing robot. This was supposed to be a walking robot, but it more kinda beebopped around. 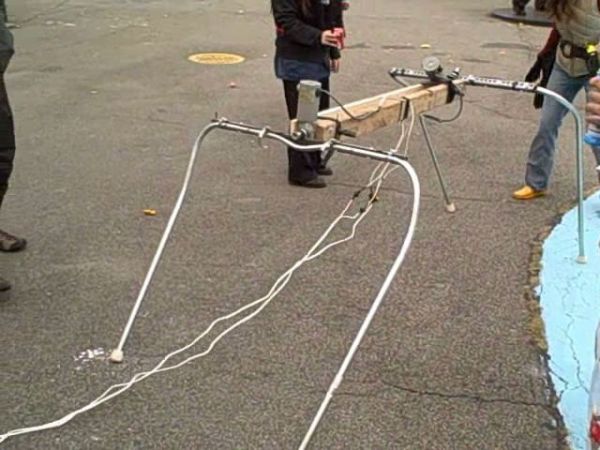 Before you make a large, high power robot, it’s good to make a smaller scale prototype. I made a simple walking robot using

= Brains: PIC16f877A,
= Actuators: two small geared pager motors (http://www.solarbotics.com/products/gm10/)
= Actuator Control: an L293 H-bridge,
= Body: I used one of those thin metal things that cover your unused card slots at the back of your PC.
= Fasteners: Everything was kept together by double sided tape and twist ties and some small screws from an old computer case.

–Notes–:
you can download the code I used (LWalker.bas).
The gears on the motors are important because they add torque (needed for a walking robot since it has lift its own weight).

Now I started building the larger scale version. I used:

= two 24 volt wheelchair motors I had bought a while ago (to make a bot for the battlebots tv show, didn’t happen) (from Ebay)
= two victor 883 24volt motor speed controllers (from ebay, originally sold by IFI robotics)
four 12v 5ah batteries (two in series for each motor) (from allelectronics.com)
= two planks of wood stolen from a contruction site
= two 10 foot pieces of EMT electrical conduit (from Lowes)
= a conduit bending tool (Lowes)
= bicycle inner tubes (go to a local bike shop and ask for popped tubes from the trash)
= u bolts, screws, locking nuts, locking washers, a ratchet wrench, hack saw, power drill
= friction feet thingees (you slide them onto table legs for friction) (from a local hardware store)

(2) bend the legs using the conduit bending tool into whatever shape you think will work (I had to try a couple different angle bends before it wort of worked).
One thing about shaping the legs, don’t make them flare out too far foreward and back. If the legs flare out too much as the robot walks they will get further and further apart and the robot will sag in the middle.
Also, don’t flare the legs out to the left and right of the robot, this makes it more stable but also a LOT harder for the robot to move the legs up and down. Flaring them inwards towards the robots body axis made a huge beneficial difference on my robot. 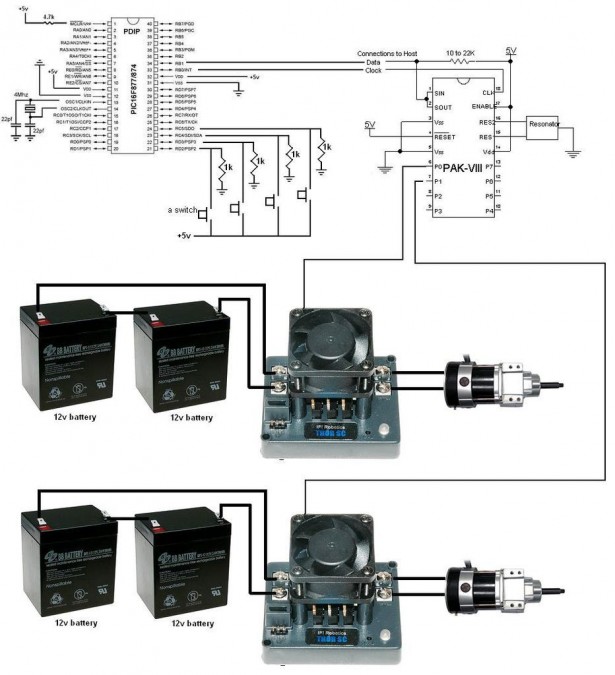 –Note–:
In my experience it is very hard to do double bends with steel conduit (see S shaped bend in diagram below). A big part of conduit bending is making sure you have enough weight distributed in the right places (to hold down different parts of the conduit, etc). So it’s goo to have very heavy objects around, like a radiator, or big people.