Here you can find out how to drive an led dot matrix with 64 LEDs (8 rows by 8 columns – 8×8 display) or less e.g. 35 LEDs (7 rows by 5 columns – 5×7 dot matrix). However the principle remains the same for larger displays – you may need more processing power and driver circuitry though.
It uses persistence of vision to let you drive the 64 LED matrix with only 10 microcontroller outputs!

Normally you would need 64 outputs for 64 LEDs but by using multiplexing and a helper chip you can get away with 10.

LED Display multiplexing simply means turning on one led for a short period of time and doing this repeatedly for each LED.

If you do this fast enough then your eye will not notice any flicker.

Note: The unit used in this project is simply an array of 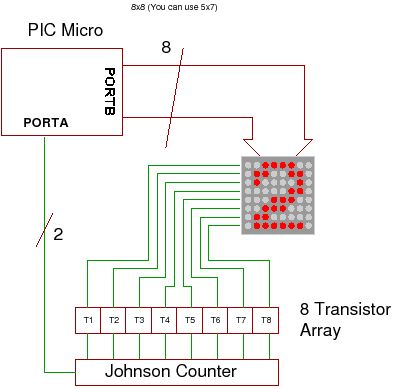 Obviously that is a tall order so the way round it is to use persistence of vision which is a way of describing how your eye works.

Your eye reacts slowly to changes in light intensity so that if a light is turned on and off quickly enough then it does not notice that the light is off. Basically your eye remembers a light pulse for a short time.

The approximate time is 20ms so if the light is turned on at a frequency >50Hz (1/20ms) then your eye will not notice any flicker at all. 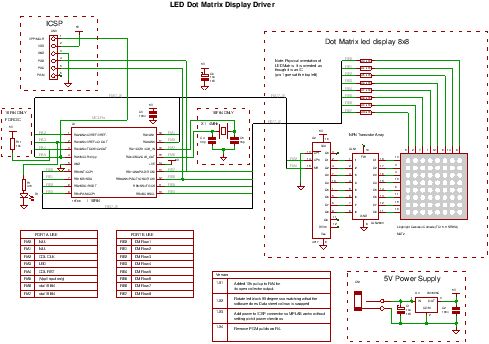 Multiplexing uses this fact to reduce the number of pins needed to drive an LED display. You can do this by splitting the 64 led display into 8 rows and 8 columns which lets you drive it using 8 row outputs and 8 column outputs. In fact the 8×8 led matrix block used here has all the leds arranged in this way already.

The 64 leds are housed in a plastic casing, wired up inside ready for multiplexing (8 row connections and 8 common column connections). The LEDs are no different to any other LEDs but the LED block saves a huge amount of soldering as all the wiring has been done for you.

…Or you could wire it up yourself if you can’t get hold of the module.

If you wire it yourself you still only need 10 control wires (just wire your leds the same as shown in the module diagram).

For more detail: How to drive a Dot Matrix LED Display.

PIR sensors are widely used in motion detecting devices. This article is about interfacing a PIR sensor to 8051 microcontroller....