The Achilles Heel of the Mikroelektronika Hexiwear is its charging: the charging and USB connector are only designed for a limited number of plug-unplug cycles, and it does not have a wireless charging capability like the Apple iWatch. Until now! I have built a DIY wireless charging system for the Hexiwear ? : 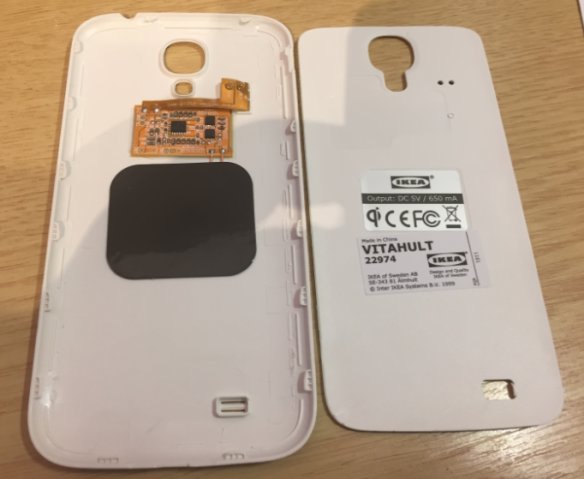 I have been experimenting with wireless charing for a few weeks, including building a Qi charging station using a kit from Adafruit (see “Qi Wireless Charging Transmitter with 3D Printed Enclosure“). The problem is that getting Qi charging receivers seems not to be that simple. With my research I have found that the Apple iWatch is using Qi technology, but they tweaked it in a way that it only works with the Apple chargers/receivers (see “Apple tweaked the Qi charging standard so that Apple Watch only works with its own chargers“). Interestingly, the furniture company IKEA is selling Qi transmitters and receivers (http://www.ikea.com/us/en/catalog/categories/departments/wireless_charging/). To my surprise, when I visited a nearby IKEA store yesterday, the older iPhone and Samsung Galaxy S4 (VITAHULT) Qi receivers were on sale for CHF 0.95 (about US$1): what could be wrong with buying a few of them? At this point, I should probably mention the ‘rolling eyes’ of my wife ;-).

The question is: can I use these for my projects? So I decided to open up the wireless phone cover. The cover has to plastic parts, and with a bit tweaking I was able to separate them. Insider there is the battery connector, the receiver circuit and the charging coil under a black FFDM (Flux Field Directional Material):

A battery small enough to be injected, energetic enough to track salmon

RICHLAND, Wash. – Scientists have created a microbattery that packs twice the energy compared to current microbatteries used to monitor...