Use a PIC Microcontroller to Control a Hobby Servo

This instructable describes how to integrate hobby servos (the kind used in RC planes, cars, etc.) into your microcontroller projects. How Servos are Different from Regular Motors

In a regular DC motor, the amount of torque the motor exerts on the shaft is proportional to the amount of current flowing through the motor. A simple way to control it is by varying the voltage across the motor; more voltage means more current which means the motor pushes harder against its load which means the shaft turns faster.When using a servo, however, you don’t control torque or velocity. Instead, you specify what angle you want the shaft at. In other words, you have positional control of the motor.

The way this works in practice is you specify the angle you want the shaft at using your PIC, the shaft turns to that position, and then holds there. The further it gets pushed away from that position, the harder it tries to turn back. Hobby servos are usually geared way down, so even a wimpy $15 or $20 one can hold its position reasonably well.

In addition to power (red wire, 5 volts works fine) and ground (black wire) connections, the servo accepts a control signal on the third wire (usually white or yellow). The signal is almost pulse width modulated, except that it doesn’t have a fixed period.It is composed of pulses of voltage, the duration of which determine the angle of the output shaft. The pulses can be from 0.9 ms to 2.1 ms long, 1.5 ms being the center position (in other words, pulse duration varies linearly with shaft angle). I don’t remember whether 0.9 ms means all the way clockwise or all the way counter clockwise, but it’s not a big deal to test our your project, see that the servo is turning the wrong way, and reverse it in your code. A new pulse must be sent to the servo once every 10 to 20 ms (50 to 100 Hz).

These timing/voltage values are for a typical servo. You should be able to find documentation for you specific servo from the manufacturer.

This schematic is actually from something else, but it’s ridiculously similar to the one I’ll use for a quick demonstration. 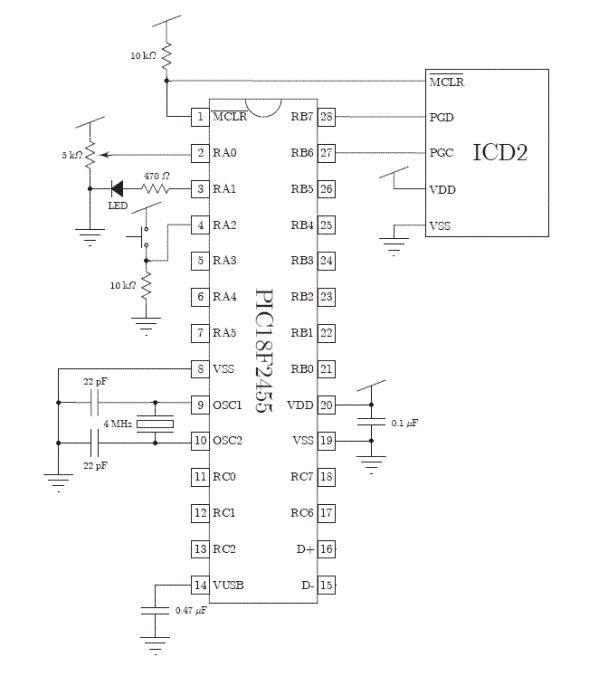 The only change that needs to be made for this project is to replace the LED and its resistor with the wire for the control signal. So instead of connecting pin 3 to a resistor and then to an LED and then to ground, just connect pin 3 to the white/yellow wire from the servo. The ICD2 block represents the PIC programmer I used, substitute your own if you want. Also, don’t forget to hook up the servo’s power and ground connections.
For more detail: Control a Hobby Servo using PIC18F2455 microcontoller
Share this:
READ  USB and PIC Microprocessors 16C745 and 18F2455

How to make a Clap-Clap on / Clap-Clap Off switch circuit! using PIC10F222

How to make a Clap-Clap on / Clap-Clap Off switch circuit! Hi all! This instructable not only gives the reader...