An Analog & Digital propeller clock i made!
It isnt Real its just because your so awfully slow!!! 😉

based on an afterimage phenomenon, ie the reaction slowness of the retina, the illusion of reality our brains are “lying”

This clock is based on Don Zehnder’s Clock. He made the first analog version (+/- 1996) 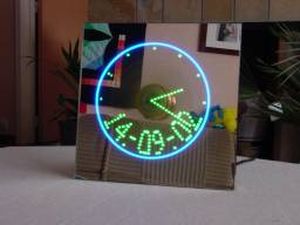 Assembler Code written by Don Zehnder
This clock has 14 red led’s & 1 Green
(red diffused 200 to 300 Mcd Kingbright L-53-SRD-D)
I prefer difused LEDs as they are better vissible from the side(angle)
Bright LEDs are perfect only when you look/stand straight in front of it
Tommorow (13-12-’97)i wil try red diffused 700 to 1000 Mcd Kingbright L-53-SRD-G
Nowadays(2002)a large choice, back in 1997 it was a bit harder to get ultra bright led’s
The propeller is mounted on a “Mecano”(Kid’s metal construction) base
7 outher led’s are controlled direct from pic’s port
8 inner led’s are together switched by a transistor
The moter comes out a Philips VCR VR 2022 two of them in 1 recorder
A 4mhz pic16c84 is clocked at 10 mhz
Later i made a brush/slipring the balbearing give too much errors
Rotation pulse is given by infrared gate
Time setting is done with a reed switch (when a magnet apears near propellor time speeds up)

Description : The purpose of this timer is to provide a countdown time from 1 second to 99 minutes &...