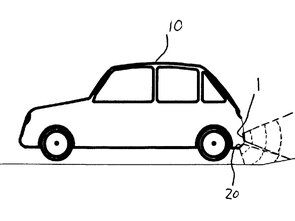 Generally, parking sensors, ultrasonic sensors are used in the circuits used in the sensor circuit is shared very different handmade, fitted to the rear bumper of the car “capacitive proximity sensor” was called to the construction’s pictures and information.

In this opportunity, I offer my first prototype of a system of parking aid for cars, with the novelty that does NOT work by ultrasound but by a system called “capaciflector”

It took me 6 months of study and development in my spare time, but The result was worth it.

This has the advantage of not having blind spots, such as ultrasound but it detects all kinds of objects along the entire bumper of the car, at any angle.

It works with an oscillator, connected to a PIC 12F675 microcontroller. You can use any PIC that has T1CKI input (to count pulses in 16 bits) such as 16F628. You could use a 16F84 in T0CKI but the disadvantage is that the counter is 8 bits so you would have to lower the frequency of operation and sample times a lot.

This oscillator lowers its frequency (or increases it, depending on the preset) as an object approaches. The frequency curve is exponential, or the inverse. Basically, it is a capacitor that is affected in its capacitance in the nearness of objects.

To make the sensor, I used self-adhesive aluminum tape to isolate PVC pipes along the entire interior of the bumper (in my case, a corsa chevrolet, 160x4cm) This would be the “positive” of the capacitor, and the body of the car, the “negative”.

The schematic has a pin called SHIELD, this terminal used in the original diagrams of the oscillator putting it on a strip equal to the sensor, between it and the chassis (mass) of the car. This is supposed to improve sensitivity but in my case it reduced it. Therefore I recommend that in the first test they do it without connecting SHIELD.

In the attachment there is:
1) – Schematic in image format JPG
2) – Schematic in livewire format
3) – PCB in PCB wizard format. ATTENTION: I did it with SMD components, if you do not have to make your own PCB.
4) – PDF with the patent of the capaciflector system (to read about its principles)
5) – Image of the original circuit of the oscillator, on which I base myself.
6) – HEX program for the PIC of the design and source code in CCS C.

This version of the program sets 3 distances (near, middle and far) to emit different patterns of “beeps” for each one.

When starting for the first time, the microphone is put in “program mode” which is where we regulate the preset and we indicate the distances.

I have little time at this time to continue writing, if someone is interested in putting it together, expose your doubts (especially the pic program) here and I will expand on how to build the sensor, calibrate the circuit and understand the program of the pic.

The version of the program is the prototype, it can be improved a lot. CLOCK and DATA outputs are available to connect a 4094 with a couple more components to have a bar of LEDs that indicate approximate distance.

The circuit can be improved by implementing a transistor, capacitor, and resistance so that it activates with the reverse gear, but that is not deactivated until a certain time of removing it. (I usually drop the car back down without having the changeset).

This first version is connected to the chassis of the car, to 12V of the reversing spot and to the aluminum strip that acts as a sensor. It must be placed at a height of about 50 cm from the floor, behind the plastic bumper.
In my case, the detection range is from about 70cm, more than enough for the application.

Clarification: This proves it and it works by detecting people. I also detect objects like a chair, or metal. I still have to prove what happens with cars, in real situations (it should work without problems, a car is much bigger and more massive than me) and probably make improvements in the program.

Any suggestion, question or idea is more than welcome. The circuit is VERY simple to make, what is somewhat difficult is to build the right sensor. Do not give up, it works.

When I have a little more time, I will post some photos and maybe a video.

With the same method used in different microcontroller has two circuits used in both series one microchip pic 12f675 circuits belonging to the other with the 16F628 was performed with software written in the C language, diagrams and drawings have PCBs.

This kit holds any size circuit board and features spring-loaded fine tips on stable gooseneck arms for hands-free PCB probing...