The board uses Microchip’s low cost PIC10F200 microcontroller along with a handful of easy to find  components making it very cheap to construct.  Everything you need to know to build this project, including the firmware code is right here on the project page. 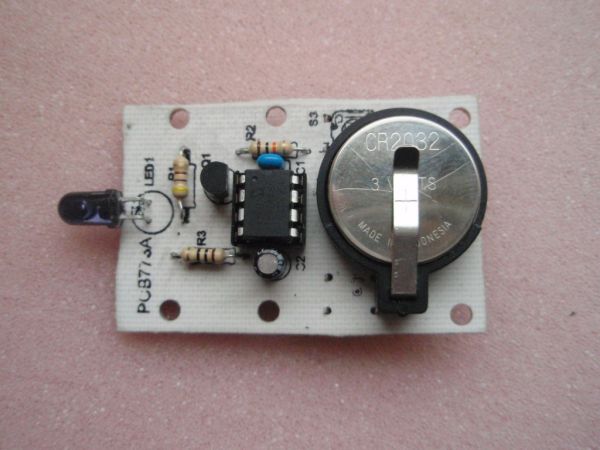 The circuit is very simple.  IC1 is a PIC10F200 microcontroller programmed with firmware to generate a 40Khz carrier modulated with SIRC formatted data.   The three switches are each assigned a different command code that the firmware will transmit via the IR LED when the switch button is pressed.  The whole unit is powered from a CR2032 3 volt lithium coin cell.  When no button is pressed the microcontroller goes to sleep where it consumes around 100nA (0.1μA).  If left unused the battery should last for many years.

When a button is pressed the microcontroller wakes and sends a SIRC device/command sequence by driving transistor Q1 which in turn operates LED1, a 950nM Infra Red LED.  The transistor is used to drive around 100mA through LED1 giving a range of 7 or 8 metres.

The SIRC data is sent in a burst repeated every 45mS while the switch remains pressed.  The signal modulates a 40Khz carrier with a 24% duty cycle.  In the screen shot below you can see the data bursts (top) and the 40Khz carrier (bottom)

For more information on the SIRC infrared protocol see:

Description This project uses a MicrochipPIC microcontroller, a serial EEPROM and a thermistor to create a temperature recorder. Performance The...