This circuit can be used to operate an electric strike or an electromagnetic lock on a door. It is not the door being opened/closed, but a small electromagnetic strike which unlocks the door. The opener has the following features currently programmed in software:

After power-on the circuit will be operating and the display LED will be constant RED when the auto switch is in OFF state and will be slowly changing between red and green when the switch is in AUTO state. Shortly pushing the BUTTON will operate the door relay for about 3 seconds (this delay can be reprogrammed). Holding down the PUSH button for a bit longer will operate the door relay after about 20 seconds. This timer delay is also reprogrammable. The display LED lights in constant YELLOW while the delay timer is running.

WARNING: entering inappropriate codes for the timers will result in strange operation (too long/short delays) and you may have to break the power for the device to reset and start again.

Entering digits: press the BUTTON the number of times the digit you want to enter. Eg. if you want to enter digit 8, press the button eight times. To finish entering a digit, wait for about 1 second and the LED color will blink, indicating that the code is stored and you can proceed entering the next digit (if there are more). Not pushing the button for 1 second in this mode will store the digit 0 and proceed with a LED blink. After all 4 digits are stored the program will restart with the new values.

the software for the microcontroller is available in source format. It is developed under the Microchip MPLAB development environment, and you will need it or some other PIC compiler to build the object code for the device. If you program the object code, check the fuse settings and make sure that all the I/O pins are programmed to be I/O lines and not OSC or MCLR. In the beginning of the source you find a #define line which sets the PIC chip under which the code will compile. It is a good idea to develop on a 16F84 device and when everything is working, compile the code for the one-time programmable 12C508. 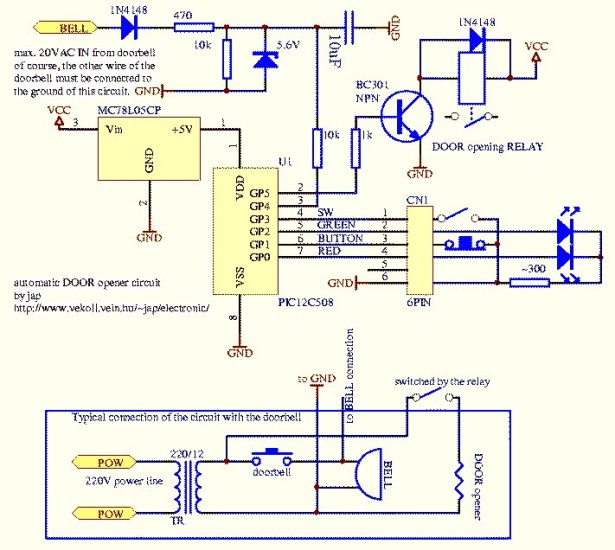 capacitors on the VCC and VDD lines are not shown, but recommended. Place 100 nF close to the PIC pins VCC & VSS, place 100 nF and 100 uF close to the 78L05 pins VCC & GND. The two LED diodes on the scematic are packaged together in a two-color green-red LED with 3 leads. The button is a break-on-push type for fast&sensitive operation.

Note: To report broken links or to submit your projects please send email to Webmaster

The AS7000 solution contains the AS7000 module including the LEDs, photo-sensor, analog front end (AFE) and controller as well as...