Lenovo has recently ventured into the community-backed SBC market, flagging off with a Rockchip-based board. They follow suit with fellow PC makers Asus. Their flagship Leez P710 boasts a more powerful, hexa-core Cortex-A72 and -A53 Rockchip RK3399 than that of the Asus Tinker Board’s RK3288. The Leez P710 was announced last February at Mobile World Congress and has been launched on AliExpress for $141. 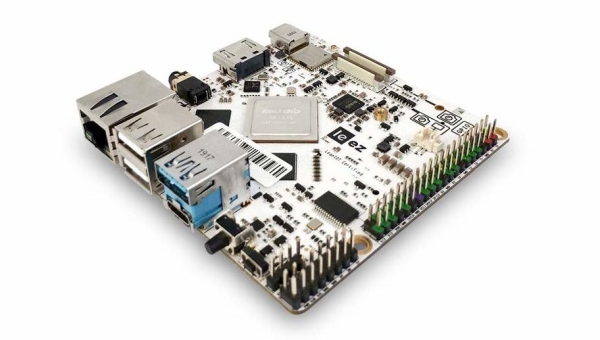 The specs listed adds a 2GB RAM option, but its not clear if it’s currently available. Available also is a microSD slot in addition to the 16GB eMMC, and also a GbE port, a wireless module with 802.11ac and Bluetooth 5.0. The M.2 B-key 3042 slot offers support for the optional 4G module, also featuring and a micro-SIM slot and an IPX connector. For display features, there are triple simultaneous displays via an HDMI 2.0a port, and a USB 3.0 Type-C port with DisplayPort 1.2 support. They both offer [email protected] video. However, the third display interface is 4-lane MIPI-DSI. It also has 2- and 4-lane MIPI-CSI, headphone jack, and a mic interface. Available also is a second Type-C for power input and a pair of USB 2.0 host ports. Additional feature set includes 40- and 8-pin GPIO connectors, a debug header, an RTC with battery connector, and power and recovery keys.

The Leez P515, is an open hardware board with a more industrial focus. At 92 x 65mm, the Leez P515 features the Sitara AM5708, one of Texas Instruments’ Cortex-A15 based Sitara AM57x SoCs.  The spec list shows GbE, HDMI, USB Type-C PD, and 2x USB 3.0 ports. Available also is a MIPI-CSI2 camera connector, 80-pin GPIO, and a connector for a WiFi/Bluetooth module. The spec list also reveals 1GB DDR3L-1333, 8GB eMMC, and a microSD slot. The Leez P515 is equipped with an optional 10/100 Ethernet port in addition to the GbE. The optional wireless module is equipped with 802.11ac and Bluetooth 5.0, and the HDMI 1.4a port is limited to [email protected] resolution. It has a -35 to 75°C operating range, powering at 5V/3A. No OS support is listed, but likely Linux or Ubuntu.

Reasons To Use VPN & 3 Must Haves When Choosing Your Provider

We’re all online nowadays, aren’t we? It’s no wonder that we love the Internet so much. It provides us with...