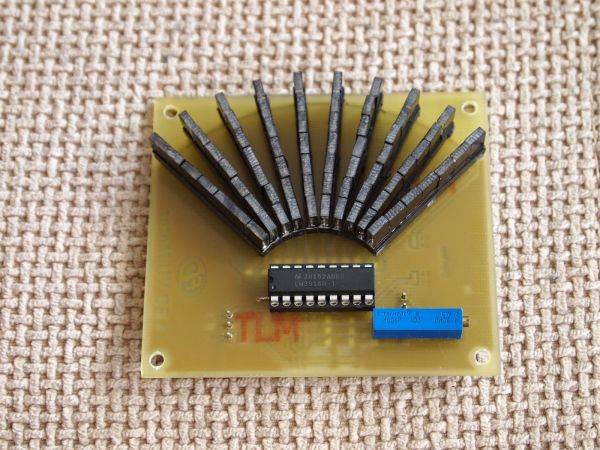 The LM3916 can be feed with AC signal without any rectification, but I wanted to implement a precision full wave rectification. I chose the schematic on page 13, fig.21 of the datasheet: “Precision Full-Wave Peak Detector”.

The LEDs are connected via sockets J3 to J12 (only one row LEDs is shown on the schematic) and I found that it’s cheaper to use a 28 pin IC sockets cut in half than regular 40 pin sockets. Of course LEDs can be soldered directly on the PCB.

The schematic needs bipolar power supply to work correctly, but the negative rail can be as low as -5V or even -3.3V. The positive rail must be bellow +25V and combined voltage of negative and positive rails must not exceed 36V. The minimum positive rail voltage depends on the voltage of the LEDs. For example if the LED have 1.9V forward voltage and we have 7 LEDs on one pin, then the minimum positive voltage will be 7*1.9V + 1.5V (drop voltage at LM3916) = 14.8V. The green LEDs usually have little higher forward voltage – 2.2V – 2.4V, so +18V will be sufficient in most cases.

Also known as the “Sketch as Fuck Lamp Dimmer” per my friend Eric, the design originating from this application note in general has...