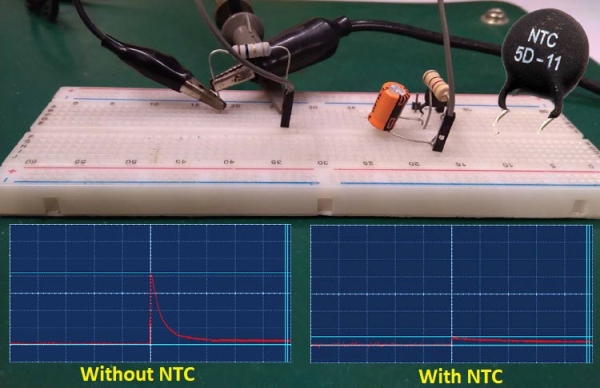 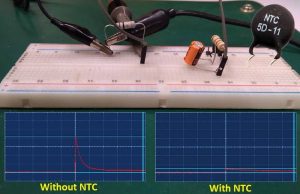 Although NTC is the widely used method to fight with inrush startup current that happens due to the high input capacitance of the load. A more conventional and straightforward method is to connect a fixed resistor in series between the load and input power supply. Let’s quickly go through this method to understand the drawbacks of this, which lead to the popularity of NTC. Consider the below image where a resistor is connected in series between the source power supply and the load.

The above circuit can be found in a low-cost SMPS or power supply module. This is a normal and cheapest way to deal with inrush current. As the resistor is used as the main component to control the input, it is acting as an inrush current limiter but this is not a proper way to connect a high current load with a power source. Why?

The worst part is if the load circuit consumes a huge amount of power the current flow through the resistor will increase, the power dissipation across this resistor will also increase, and the efficiency will eventually decrease. The more and more power it needs to be dissipated across the resistor, one needs a bigger wattage resistor to fulfill the power requirements. Not to mention, it is now clear that it is not a good choice to include a resistor as an inrush current limiter in a high power circuit.

NTC stands for a negative temperature coefficient. It has a direct relationship between temperature and resistance. If the temperature increases slightly, the resistance decreases significantly. This is a useful feature to deal with limiting the inrush current. During the first power-up situation, when the load gets power from the power source for the very first time, the NTC acts as a high-value resistance in normal ambient temperature, thus effectively blocking inrush current into the circuit.

After a very short time, when the high current flows through the NTC, the internal temperature of the NTC increases slightly and ends up affecting the resistance. The resistance decreases significantly low and makes a direct path with the load and the power source. As the resistance is low during the normal working state, the power dissipation will be lower and the efficiency will improve also.

Generally, when the high-value capacitive load is connected with a power source, NTC is added between the positive lines of the power supply unit.

But in the case of an AC power supply unit or SMPS, the NTC is connected in the hotline before the bridge rectifier diode. We have already made a few SMPS or power supply circuit that uses NTC and inrush current limiter.​

Selecting the right value of NTC

The calculation for selecting the inrush current limiter is to determine the peak voltage and the peak current.  As NTC is a resistor, the Ohms law is sufficient to accommodate the value of the NTC resistance.

To evaluate the effect of the inrush current a capacitive load is connected across a power supply unit. The testing is done on a breadboard along with a 10 Ohms NTC. The circuit is shown in the below image.

The voltage drop can be determined using the Ohms’s law again where Current = Voltage / Resistance. In our case, we used 1 Ohms resistor, therefore, 1A of current flow through this resistor will produce a voltage drop of 1V.  The NTC is connected across the positive line of the circuit.

The resistor R2 is a load resistor that issued for the fast discharging of the capacitor. The capacitor is a 100uF 50V general purpose capacitor. Since Inrush current flow happens very fast and for a short duration of time, the trigger function of the Oscilloscope is used.

After testing the circuit without the NTC, the peak current flow through the resistor is shown in the below image

As the oscilloscope is set to 1V per division, the peak voltage is 4.2V. Therefore, the peak current of 4.2A is recorded. This is the inrush current when a 9V power supply unit is connected across a 100uF 50V capacitor.

So, to block this, a 10 Ohms NTC is connected across the positive supply of the circuit. The output is shown in the below image –

The Oscilloscope setting was kept the same and also the source voltage is 9V as previous, but the inrush peak current is significantly decreased to almost 500mA.

In detail video of the inrush current effect with or without NTC can be seen in the below video. Therefore, by using an NTC, inrush current can effectively be suppressed across a huge capacitive load. If you have any questions please leave them in the comment section or use our forums for other technical questions.

Oftentimes, developing an end application is like a scary game of maze. One can easily get lost in its winding...