Sometimes you only need a simple and cheap RS232 terminal to get sufficient control over a PC or a RS232 device. There is no need, no space or even no power to place a monitor, a computer case and a keyboard. Maybe there exists also the problem, that the PC or the device is located somewhere else and you want to interact with it over a short distance. 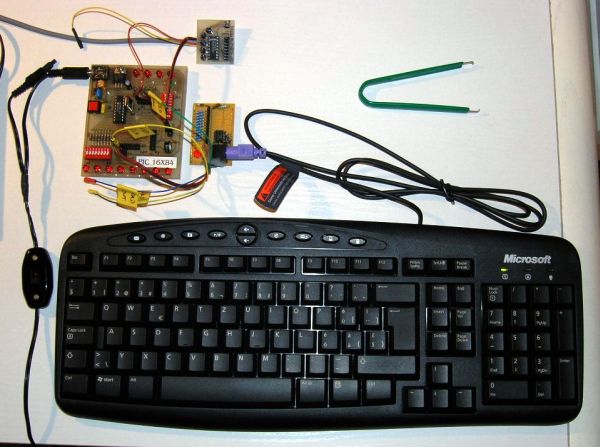 The cheapest way to obtain a complete user interface is the use of standard components, such as LCD modules and PC keyboards. A standard PC keyboard (PS/2 type) costs about US-$ 12, a 2 lines by 40 characters dot matrix LCD module around US-$ 20.
To connect these items to the serial port by cable, a microcontroller and a RS232 level shifter are necessary. For longer distance control, there exists also the possibility to interconnect the terminal with the other device by a wireless physical transmission layer.

The RS232 terminal for instance is very convenient in conjunction with a PC based Juke-Box playing MP3 files. You only need a command line programmable MP3 player (or a player with a supplied Active-X interface) and a software-based connection between player and RS232 port. This software ‘connection’ could be realized using Visual Basic and the often supplied Active-X interfaces of the various Windows based MP3 players.

Another possible area for applications is PC observed access control. Therefore, the RS232 terminal is placed at the entrance to the supervised area.

A further enhancement to be able to satisfy todays needs for network-based communication would be a complete TCP/IP based communication layer together with an Ethernet front-end. Then it would be possible to control simple Ethernet appliances, e.g. your coffee maker, electrical rolling shutters, autonomous net-based lawn mower,… 😉 by this remote terminal. Brave new world …

The fact, that the scan pattern acquisition is carried out using an interrupt service routine and the decoding thereof is done during normal operation mode allows for performing other tasks concurrently: That’s why I call the acquisition methodology preemptive, it does not block the processor in the main loop while acquiring keyboard data – therefore passing processing resources to other services. Explicitely, it works as follows:
After proper acquisition, the corresponding flag KBDflag is set (at the end of the ISR) and the decoded keyboard character resides in the register KBD. The KBDflag is cleared at the end of the service routine KBDdecode.

Only RS232 transmission is supported by this program, since PORTB,0 interrupt is already used by the keyboard clock line. There exists no possibility to implement also RS232 reception using my modules m_rsxxx.asm, because they require PORTB,0 as well and are laid out as non-preemptive data acquisition routines (see also ‘Limitations’).

For dedicated code adaptations, please refer to the section ‘User-specific Customization’ below.

To visualize the ASCII data sent by this microcontroller application, use a terminal program like the Windows Hyperterminal. Below an example session, which proves the correct functionality of the keyboard interface. This terminal program and the Excel 97 RS232 Debug Interface have been used to debug the interface during implementation time.